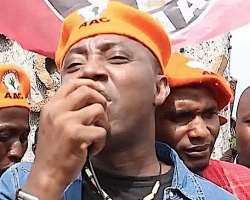 Activist and publisher of Sahara Reporters, Omoyele Sowore, has disowned claim that he had abandoned the plan to be part of a mass protest scheduled for Nigeria’s Independence Day and embraced agitation by a segment of people in the Southwest for the creation of Oodua nation out of the country.

Sowore, who was a co- convener of #RevolutionNow said this while reacting to a publication attributed to one Maiyegun, indicating that he has abandoned the #RevolutionNow Global Mass Action slated for October 1st 2020 and has declared support for agitators of Oodua nation.

The activist who described the claim as ‘false narrative’ said in a post on his Facebook page on Monday page that without a #Revolution in Nigeria, an Oodua Nation will be worse than present day Nigeria.

Sowore cited his experience when he was arrested and the arrest of protesters across the Southwest to justify his claim.

He also asserted that the goal of #RevolutionNow protest was not just about a united Nigeria, but a “united Africa” in his lifetime.

See his post below:
FALSE NARRATIVE: This might just be a tactic to demobilise people who are gearing towards #RevolutionNow Global Mass Action slated for October 1st 2020, to be clear, I doubt that Maiyegun was in on this plot. I just want the general public to note that, our goals are even beyond Nigeria, I want to see a united Africa in my lifetime, if possible or at least let our ideas and sacrifices propel future revolutionaries to achieve that lofty goal!

Let me share some of my experiences with compatriots: When I was arrested in Lagos from my hotel room on August 3rd 2019, the people who came to arrest me were mostly Yoruba goons within the DSS, the fellow (a senior officer who first forcefully snatched my phone) who made me sleep on wet floor at Shangisha was a Yoruba man, the fellow who gladly escorted me to Abuja smiling happily all the way and ordering omelette and fried yam on a small jet that took us was Yoruba man, my two jailers who made sure I could not talk to my wife and kids on the phone were Yoruba persons, the legal officer at the DSS headquarters in Abuja who drafted the false charges against me was a Yoruba man!

Without a #Revolution in Nigeria, an Oodua Nation will be worse than present day Nigeria!

Since I got released I have it on authority that it is in Yoruba states - Osun, Oyo and Lagos that young people who participated in #RevolutionNow protested since 2019 are still under malicious trial by Yoruba Magistrates, no where else in Nigeria as of today is anyone else still under trial. Even the young men arrested for pasting poster in 2018 are still on trial in Lagos. It was also in the Oodua states that our members were arrested on August 5 2020 and detained unlawfully for partaking in peaceful protests! #RevolutionNow No Going Back!