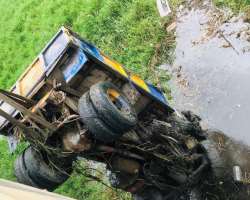 Three people have been confirmed dead as a truck fell into the Epe River from Berger Bridge late Friday night.

As at Friday night, the number of people in the six tyres truck were uncertain as rescue officials could do nothing this Saturday morning.

“Upon arrival at the scene of incident, it was discovered that the six (6) Tyre Truck was loaded with Sand .The number of people in the truck was unknown.

“Since it was the late hours of yesterday night, a combined team of Agency responders, Marine Rescue Unit, Nigeria Police and Local Divers have been carrying out Search and Rescue operations.

No deaths or casualties confirmed at present,” he had said.

However, on Saturday, Oke-Osanyintolu confirmed that three adult male were brought out of the River dead.

”The six (6) Tyre Truck has been located and retrieved along with the bodies of three adult male.

“A combined team of Agency responders, Marine Rescue Unit (LASWA & LASEMA), Nigeria Police and Local Divers have been carrying out Search and Rescue operations,” he said.

He said further search by a team of police and LASEMA was still on.