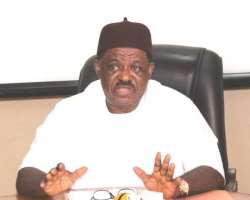 Izzi Nnodo people are the second largest family group in Ebonyi State. That we, Izzi Nnodo, are divided to the marrow is no news to all Ebonyi people. What many people, especially my Izzi Nnodo brethren, seem to have forgotten is the history and source of the dichotomy. This seeming amnesia has given fresh impetus to Senators Sam Egwu and Chris Nwankwo who are the undisputable ancestors of Izzi dichotomy; hence their unabashed appearance in the scene once more to perfect Izzi dichotomy and take the clan to the precipice ahead of 2023 election year for their private benefits.

Izzi Nnodo dichotomy was the brainchild of Dr. Sam Egwu who in league with his military cohorts usurped the opportunity of the people of Izzi Nnodo to become the first civilian governor of Ebonyi State. Haunted by both his tainted conscience and minority status, Egwu, a student of Robert Greenne, felt that the surest bet to secure his grip to power was to divide the major family units in Ebonyi State. He launched statewide programmes of dichotomy dividing Izzi, Ezza, Ikwo, Afikpo, Onicha, Ohaozara, Ngbo, Ivo et cetera along parallel lines in 2001. Contemporaneously, Egwu united minority groups like Orri and Igbo Essa through the infamous INUE overlords association; as well as other strangers from Anambra, Enugu, Abia, Imo et cetera through the Urban Forum. Egwu pitched the intra-family parallel groups against each other and supported the parallel groups in the major family units with government funds and appointments. This made reconciliation impossible until the end of Egwu's eight-year administration when Ezza, Afikpo, Ohaozara, Ngbo, Onicha et cetera respectively picked their pieces together again in what passed for fragile unity.

However, our people of Izzi Nnodo were not as lucky as their aforementioned brothers for two reasons. One, Izzi Nnodo comprises two kindreds, Unwuera and Igbojima, and Egwu divided Izzi along those penetrating kindred lines with Unwuera wielding great influence in Egwu's administration to the chagrin of Igbojima who were actually neglected. Two, the great opportunity of Egwu's successor being an Izzi inlaw was diverted by Igbojima kindred led by Chris Nwankwo to extreme karmic ends where the Unwuera were subjected to eight years of unbridled and multi-faceted humiliation. Presently, dichotomy is fast becoming the middle name of my people of Izzi Nnodo; and with the current atavistic political menaces of Senators Chris Nwankwo and Sam Egwu as well as the brutal speaker of Ebonyi State legislature who are the greatest beneficiaries of Izzi dichotomy, the end of our disunity does not seem to be in sight.

Egwu's futile attempts to be more Izzi than the Ishiuke by ostensibly launching overt campaigns for Izzi in an election which timetable and guidelines are yet to be drafted is a negative omen designed to further traduce and divide Izzi Nnodo; and so deserves to be condemned by every sane Izzi man. The truth is that Igbojima wants to trade off the 2023 senatorial slot of Unwuera and Ebonyi Local Government Area for the third time to Egwu for the mess of pottage which is the dicey 2023 gubernatorial slot. At the risk of my limbs and life, may I state the truth which is that Izzi Nnodo's claims to Ebonyi 2023 guber is unfirm, inferior and cannot stand the comparative test of one other family unit I am reluctant to mention here! Senators Sam Egwu and Chris Nwankwo and many others cannot deny this fact, but united by the selfish interest of self-perpetuation at the red chambers and perpetual colonization of the Unwuera respectively, Egwu and Nwankwo chose to tango at the expense of Izzi collective interest. If the speaker of Ebonyi State legislature thinks he is qualified to contest the probable Ebonyi guber, why trade off the due 2023 senatorial slot of Izzi/Unwuera/Ebonyi LGA to undeserving Egwu? What do the trio of Nwankwo, Nwifuru and their collaborators want Unwuera to do? Or, do they want the excision of Unwuera from Izzi Nnodo? Are these people not seeing the rivers of blood, oceans of tears and plateaus of anguish from the killed, maimed and and those rendered homeless across Izzi land because of the interplay of negative emotions generated by the selfish interests of the trio in 2011, 2015 and 2019? Do these casualties and victims not deserve appeasement, healing and rehabilitation respectively?

Sam Egwu has not offended anyone by flagging off his 2023 Ebonyi North senatorial campaigns at Amegu Izzi during the 2020 Ojiji celebration, but our people of Izzi have to subject his ambition to strict cognitive colour-seperation. Egwu should also realize that he, alone, does not constitute Ohaukwu LGA. We must also come to terms with the fact that Ebonyi LGA is part and parcel of Ebonyi North senatorial district and Ebonyi State. Izzi Nnodo Development Association's rejoinder to Izzi Tehu Foundation should not be swept under the carpet.

Together, Izzi Nnodo will be better!