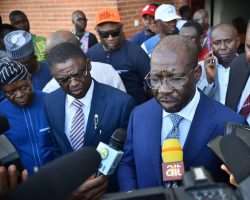 The Peoples Democratic Party has maintained an early lead in the Edo State governorship election held on Saturday.

Results released so far by the Independent National Electoral Commission at its collation centre in Benin, the Edo State capital show PDP winning in seven out of the 10 local government areas which results have been released by INEC.

But All Progressives Congress came top in Etsako West Local Government Area, where a former National Chairman of the APC, Adams Oshiomhole, and the Deputy Governorship candidate of the PDP, Phillip Shaibu, hail from.

But PPDP still posted a significant showing in the area. The APC candidate for the election, Osagie Ize-Iyamu, scored 26,140, the incumbent and flag bearer of the PDP, Godwin Obaseki, polled 17,959 votes.

With results from eight local government areas yet to be declared the pendulum may still swing either way.