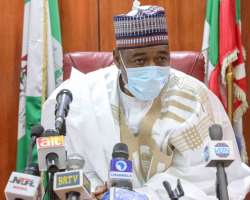 Governor Babagana Umara Zulum of Borno State has appealed to the UN Resident Humanitarian Coordinator in Nigeria, Mr. Edward Kallon, and other stakeholders to shift their mission and mandate from humanitarian support to tackling the root causes of insurgency in the north east region.

The governor also noted that the root causes of the boko haram insurgency include: endemic hunger, low literacy, lack of job opportunities particularly in communities which rely on the shrinking Lake Chad River Basin and poor control of porous land borders among others. Governi Zulum made the appeal Thursday evening when the UN delegation led by Mr. Kallon paid him a courtesy call at th Government House Maiduguri also expressed appreciation to all humanitarian and development partners rendering different kinds of support to the Internally Displaced Persons, (IDPs) in the state .

He further commended the efforts of the Nigerian Army in supporting government’s efforts and commitments to improve the welfare of the IDPs while thanking the UN Resident Humanitarian Coordinator and other members of the UN country team for the very important visit.

He said",We have been receiving tremendous support from the humanitarian partners as well as the development partners. But there is a need for us to address the root causes of the insurgency". “The continuous dependent on handout by our IDPs is not a solution to ending this humanitarian crises. While food supply is dwindling, the population is increasing in quick geometrical ratio.

“There is increasing prostitution in the IDPs camps, there is increasing rate of drugs abuse, there are procreation and increasing gangsterism in the camps. While appreciating all your support, there is need for us to work together with a view to shifting our goals from our present humanitarian support to medium, and long-term sustainable solutions.

“The only solution is for our IDPs to return to their ancestral homes or to another location where it is termed as safe in a dignified manner so that they can earn their means of livelihood. Government of Borno State and the Federal Government has been supporting the IDPs with large amounts of food items. "I remember within the last six months, the FG has allocated nothing fewer than 450 trucks of food items to Borno State in addition to what we have been providing. Therefore, the earlier the better we put our heads together in resettling back our IDPs to their ancestral town so that they will start their normal farming activities,” Zulum said.

In his remark, the UN Humanitarian Coordinator in Nigeria, Mr. Edward Kallon, highlighted some activities of UN humanitarian partners in the State while attributing the lingering crisis in the northeast to a development deficit such as; weak institutions and lack of governance at the three tiers of government: Federal, State, and Local Governments; impact of climate change, and increased competition over land, and water resources.

The UN Humanitarian Coordinator also stressed the need to adopt political solution in addressing the crisis in the region. “Your Excellency I have always said, UN in Nigeria believes there is no military solution to this intractable crisis in which Borno has suffered more than its fair share. We believe a political and peace process is essential to compliment the gallant military efforts if we are to achieve and sustain peace,” Kallon said.

He further cautioned that the northeast region crisis has reached an alarming level of food insecurity and hunger as a result of the 11-year insurgency while presenting the reports of four recommendations to the Governor for further consideration.