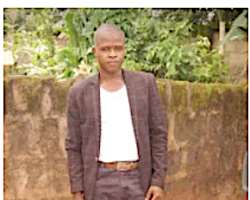 A 47-year-old Prophet with Sabbath Church, in Nnewi, popularly known as Prophet Emeka Ezimmadu on Thursday night butchered his mother and two of his five children to death. Prophet Ezimmadu as he is popularly known in Nnewi and surrounding communities by members of Sabbath Church was believed to have acted under the influence of evil spirit allegedly sent on him to kill his eighty-five years old mother,

Madam Agnes Ezimmadu, his two children Ifechukwu and Mmesoma aged nine and two respectively without any form of provocation. According to an eye witness, the damage would have been worse but for the timely intervention of neighbours who engaged the prophet before the arrival of vigilante men who overpowered him and tied him up.

The injured were immediately rushed to an undisclosed hospital where the prophet’s mother and two of his children were pronounced dead by doctors on duty.

An eye witness said that doctors are battling to save the lives of the suspect’s wife and two other children, who suffered various degrees of injuries due to Matchette cuts at intensive care unit of the hospital. Many Nnewi residents have been trooping to the residence of the alleged demented Prophet to see things for themselves. Meanwhile, the Uruagu vigilante operatives have handed over the suspect to policemen from Central Police Station Nnewi.

The Police Public Relations Officer, PPRO, Mr Haruna Mohammed who confirmed the incident at the Police WhatsApp platform said Police operatives attached to Nnewi Division have arrested Prophet Ezimadu aged 47 years at Okpuneze Uruagu in Nnewi North LGA of Anambra State. The suspect attacked and killed two of his children 9 years Ifechukwu Ezimadu, his 2 years old daughter, Mmeso Ezimadu and his own mother, one aged 85 years with a cutlass while they were sleeping.

“Suspect allegedly used the same weapon and injured his three other children, Nonso Ezimadu aged 12 years, Chinaemerem Ezimadu aged 11 years and Ngozi Ezimadu aged 8 years of same address. “Meanwhile, police detectives visited the scene and rushed victims to the Akwudo hospital for medical attention where the two children and the aged mother were certified dead by a medical doctor while the three other children were receiving treatment. “Corpses deposited at Akwudo hospital morgue for autopsy and case transferred to State CID Awka for discreet investigation.”