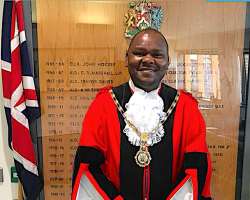 NIGERIAN-born scientist Councillor Ernest Ezeajughi has been elected to serve a second four-year term as the mayor of Brent for another year following yesterday's first ever virtual annual general meeting (AGM) of the council.

Councillor Ezeajughi was first elected mayor in 2019 and has gone about discharging his duties with gusto. Unfortunately, due to the coronavirus pandemic, Councillor Ezeajughi has had to cut back on his outings this year but in recognition of his sterling work, the council voted to return him to office for another year.

Yesterday's event was attended by councillors from across the borough and it also confirmed that Councillor Lia Colacicco, who represents Mapesbury ward, will continue as deputy mayor. During his mayoral year, Councillor Ezeajughi will continue to promote Brent and participate in activities that help the economic, social, cultural and environmental wellbeing of Brent and its residents.

At the AGM new members of Brent committees were also officially appointed and the new cabinet was noted. This new cabinet has eight portfolio members as well as a leader and deputy leader. Councillor Ezeajughi said: "The pandemic has made it an unusual and difficult year for all of us and I haven’t been able to get out and see people as much as I would have wanted to. However, I have had amazing support for my charities so far and it has been a privilege and honour to serve the people of Brent.

“I am delighted to be continuing as mayor of Brent and raising awareness of the Sickle Cell Society and Jason Roberts Foundation."

First set up as a registered charity in Brent in 1979, the Sickle Cell Society is celebrating 40 years of working alongside health care professionals, parents, and people living with sickle cell to raise awareness of the disorder. In the other hand, the Jason Roberts Foundation is a registered charity working to support young people to celebrate diversity and promote respect across the UK. Local residents can keep up with the mayor's official engagements and visits around Brent by following his Twitter feed @mayorofbrent or on Instagram @mayorofbrent.