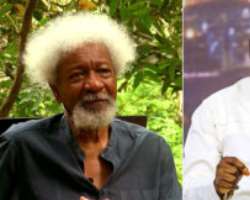 The presidency has rebutted recent comments by Professor Wole Soyinka, suggesting that under the present government Nigeria has become more divided than ever before, saying that the administration had indeed been working hard to mend crevices it inherited.

Special Adviser to the President on Media and Publicity, Mr. Femi Adesina, said that while the iconic stature of the Nobel Laureate, Prof. Wole Soyinka, is not in doubt, it is not everything he said that should be taken as absolute truth.

He spoke as a guest on Channels Television's Politics Today on Wednesday.

According to Adesina, “Professor Wole Soyinka is somebody we respect, you don't have them too many in a country, even on a continent. Professor Soyinka is an icon, he is an avatar, we respect him, we listen to him but then we don't take everything he says hook, line, and sinker.

The Presidential spokesman said that President Buhari inherited a “terribly” divided country and that he had been trying to reunite since he came to power back in 2015.

But Adesina’s position is at variance with the cross-current of views of Nigerians many of whom regard the president as ethnic bigot.

“As of 2015, when President Buhari came, Nigeria was terribly, terribly divided; divided along religious lines, divided along ethnic lines; divided along language, divided hopelessly, terribly and that is the division that the President had been working at. But you see that a lot of people instead of letting harmony return to this country, thrive and luxuriate in widening the gulf. They play politics with everything.”