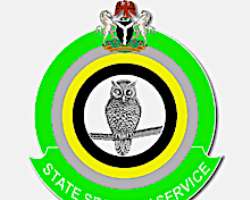 A call has gone to president Muhammadu Buhari, and the national assembly to either rejig the legislative Frameworks setting up the Department of States Services (DSS) to make it much more responsive to the growing trends of crimes and criminality such as armed banditry; terrorism and kidnappings to partner more with The police and the armed forces or to compel the DEPARTMENT OF STATES SERVICES to focus on eradicating threats to the stability and security of Nigeria such as terrorism; Kidnappings for ransom and armed attacks of communities by armed freelance hoodlums rather than its fixation with arresting and detaining civil society Activists; Media activists or political opponents of President Muhammadu Buhari.

This call has come against the backdrops of recent unfortunate forceful kidnappings and killings of many Nigerians including operatives of the Nigeria police and the department of state services by dare devil armed kidnappers and terrorists especially in the North West of Nigeria.

HURIWA stated that it does not make any sense that the DSS funded by the taxpayers in a constitutional democracy is being used by the President to scuttle the enjoyment and the exercise of the constitutional freedoms which is threatening to turn Nigeria into a police state or FASCISM.

“The increasing challenges of breakdown of law and order across the country demands immediate, comprehensive, radical Reforms of all segments of the armed security services with special attention to the department of state security (DSS) which is increasingly losing focus and is gaining the notoriety as the anti-democratic armed security agency whose mandate is to cripple the expansion of enjoyments of fundamental freedom by the citizens.

HURIWA said a perusal of the establishment Act setting up the State Security service otherwise popularly called Department of States Services has shown that the agency ought not to create the public notoriety as the agents of anti-democratic forces but is established to eradicate such heinous crimes that threaten the security and stability of Nigeria just as the Rights group said the activities of terrorists, armed bandits, armed Fulani herdsmen and sundry other armed freelance hoodlums constitute a grave threat to the survival of Nigeria because of the obvious fact that millions of Nigerians are now living in fear and apprehension just as the public confidence and trust on the capacity of the present Central government to secure lives and property of the good people of Nigeria has waned rapidly demanding some fundamental reforms of the operational strategies of all relevant armed security forces just as the Rights group said the ways and manners that the Department of States Services operate is not in tandem with the essence and import of the Establishment Act that set it up.

The Rights group said the recent activities of the secret police known as state security service(SSS) or Department of state services (DSS) in which many perceived opponents of the ruling All Progressive Congress produced President have been arrested and arbitrarily detained are some of the diversionary illegalities that are weakening the operational fabric and focus of the Department Of State Service (DSS) to such a negative dimension that even the operatives are becoming endangered species with cases of kidnappings and killings of trained operatives of DSS by armed kidnappers.

HURIWA said: "We as committed patriots are hereby calling on President Buhari and the legislative chamber of the National Assembly to reorganize the DSS and give them more central law enforcement mandates to compliment the Nigerian police to jointly operate like the way the police and the FBI are working in the United States of America to stamp out and confront armed and violent criminals".

"This urgent task of reforming the DSS should be embraced as a national rescue mission because it is indeed embarrassing that officers of DSS, Federal Road Safety Commission and the Civil Defence have all fallen victims of the activities of kidnappers. We suggests that rather than the DSS divert her statutory function to only that of crushing civil rights activists and perceived political opponents of the presidents in office which is unconstitutional, the DSS should be refocused to work in a similar form like the United States' Federal Bureau of Investigations,(FBI) So it can jointly work with the police to crackdown on the widening wave of armed kidnappings and to go after armed bandits and armed Fulani herdsmen so as to restore national Security and national Stability."

HURIWA recalled that a 33-year-old operative of the Department of State Services, Sadiq Bindawa, was reportedly murdered by suspected kidnappers in Katsina State just as the kidnappers reportedly collected N5 million ransom from his friends and relatives before killing him.

HURIWA which cited a news report stated that according to sources, Bindawa’s corpse was discovered at Kurfi town on Sunday morning.

Bindawa, who worked at the Abuja office of the DSS, was said to be in Katsina over the weekend.

His kidnappers were said to have trailed him to his house located behind the Federal Secretariat Complex, Dandagoro area, Katsina around 10.30 p.m on Saturday.

Eyewitnesses revealed that the kidnappers first attacked the private security guards at the entrance of the building before whisking Bindawa off to an unknown place.

It was further learnt that the kidnappers later got across to his family and friends through his phone and demanded a ransom of N13million.

HURIWA quoted the news reports trending as stating that one of the sources revealed, “We went to Kurfi on Sunday hoping to pick him as directed but we saw only his corpse with parts of the body riddled with bullets. We reported the incident at the Batagarawa Police Station.”

HURIWA said the media reported the spokesman for the Katsina State Police Command, Gambo Isah, as referring the enquiry on the incident to the DSS eveb as he reportedly said, “Please, go to the DSS office for any clarification you want to make. They are security agents like the police and they have their public relations unit.”

HURIWA recalled that the media said operatives at the Katsina headquarters of the DSS denied entry to the office of the director, insisting visits are strictly on appointment..

eveb as the media confirmed that meanwhile, Bindawa’s remains have been buried in Katsina.

The Rights group said that another report has it that Suspected bandits on Sunday opened fire on motorists along Rigachikun-Afaka road in Kaduna and abducted a yet to be confirmed number of people, including an operative of the Department of State Security Services (DSS).

HURIWA said news reporters gathered that the DSS operative, who is with the headquarters in Abuja, was returning from the training school in Kaduna when the incident occurred just as a security source told a correspondent of a respected national daily that she could not confirm if the operative was abducted with his four-year-old son as speculated but said traces of blood were found in his vehicle.

“I’m not sure he was the target of the attack.

“I cannot confirm the rumour that his family has been contacted for ransom but all we know is that his vehicle and other cars were shot at and there was blood in his car,” she said even as the Kaduna State Police Command through its Public Relations Officer, ASP Mohammed Jalige, when contacted said it had no report of the incident.

agencies, charging each with the conduct of the relevant aspect of the national

There shall, for the effective conduct of national security, be established the following National Security Agencies, that is to say-

(a) the prevention and detection of crime of a military nature against the security of Nigeria;

(b) the protection and preservation of all military classified matters concerning the security of Nigeria, both within and outside Nigeria;

(c) such other responsibilities affecting defence intelligence of a military nature,

both within and outside Nigeria, as the President, or the Chief of Defence Staff, as the case may be, may deem necessary.

(2) The National Intelligence Agency shall be charged with responsibility for-

(a) the general maintenance of the security of Nigeria outside Nigeria, concerning matters that are not related to military issues; and

(b) such other responsibilities affecting national intelligence outside Nigeria as the National Defence Council qor the President, as the case may be, may deem necessary.

(3) The State Security Service shall be charged with responsibility for-

(a) the prevention and detection within Nigeria of any crime against the internal security of Nigeria;

(b) the protection and preservation of all non-military classified matters concerning the internal security of Nigeria; and

(c) such other responsibilities affecting internal security within Nigeria as the National Assembly or the President, as the case may be, may deem necessary.

notwithstanding the provisions of any other law to the contrary, or any matter therein

mentioned.
(5) In this section, “classified matter” has the same meaning assigned thereto in

section 9 of the Official Secrets Act."
The Rights group said under the Establishment Act, the DSS ought not to be misused as an agency to pursue political witchunt and to continuously clampdown on perceived opponents of President Muhammadu Buhari and to use brute force to muzzle the EXERCISE of the fundamental human rights of Citizens enshrined in the chapter 4 of the Constitution and a plethora of other global human rights laws.