Are You A Yoruba Or Omo Oduduwa? 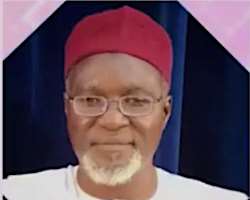 A colleague, an Associate Professor of history, made the following submission on an academic platform:

IGBAJO WAS FOUNDED IN 1250-Historian
In his latest work, "Igbajo: History, Culture and Development", Associate Professor of African and Culture History, Ranti Ojo, quoted the late Ooni of Ife, Oba Adesoji Aderemi, as giving a list of the 26 children of Oduduwa that have the authority to wear beaded crowns to include the Obalufon Ogbogbodirin, eldest surviving son of Oduduwa who was said to have succeeded Oduduwa;

Oba of Ado (Benin);
the Orangun of Ila;
the Alaketu of Ketu;
the Oloyo (not Oranmiyan);
the Obarada who was driven to found lately the kingdom of Dahomey; Oninana who founded a kingdom in what is now known as Gold Coast (Ghana) today;

Onipopo of Popo;
Owa-Oore of Otun;
Alara of Ara;
Ajero of Ijero;
Ewi of Ado;
Awujale of Ijebu;
Akarigbo of Remo;
Osemawe (who was called in from Ondo to be crowned);

Olowu of Owu (son of the first daughter of Oduduwa);

Owa Aringbajo of Igbajo;
Owa Otan,
and Owa Obokun of Ilesa.
Ojo, who is the immediate past Head of Department, History and Diplomatic Studies, University of Abuja, also recalls an Oyo State publication of the coronation programme of the immediate past Ooni of Ife, Oba Okunade Sijuwade II, in 1980, saying that Adegbola Akeran, who founded Igbajo, a predominantly Ijesa community, was among the 27 offsprings of Oduduwa who left Ile-Ife to found various kingdoms. Interestingly, the names of some of today’s big towns and cities were conspicuously missing in the Adesoji list.

Ojo, in his list of some major Yoruba towns, affixed the approximate years of their establishments to include

Brilliant narrative Sir. I'm, however, wondering why no town in Oke-Ogun managed to make the list whereas there is a narrative that established the presence of most of the Oke-Ogun towns before the arrival of Oduduwa. It was also contended that his Oke-Ogun elder brothers advised him to go to Ife and found his own Kingdom and that he had ONLY ONE SON, Okanbi who gave birth to the seven children that founded some of the kingdoms listed.

You may wish to find out the nature and language of the people he met in Ife and his own language too.

You may also wish to defend Ife as a conquered territory rather than a founded Kingdom.

You may need to explain how we(Oke-Ogun people) became children of our younger brother if politics of peace and slave mentality that make all of us answer to foreign nomenclatures (Yoruba, Ibo, Hausa, Nigerians etc) are not being forcefully endorsed and maintained through intellectual abracadabra.

I didn't mean to shake any table. I just want to know why we should accept the narratives of foreigners about ourselves. Niger(slave) area became Niger(River) area and became Nigeria? It is a shame if it is true.

I'm not into history but I, also, have parents and friends among the traditional rulers who must not talk.

Another question Nigeria's historians must find answer to is ' who signed the amalgamation considering the relatively young age of Ahmadu Bello, Zik and Awolowo at that time?'

He promptly responded:
"Prof.,I love this piece. This is the era of Agbonniregun which of course preceeded Oduduwa's arrival in Ile Ife. At a later and continent time I will comment adequately on this with historical facts. Oke ogun no doubt played significant role in the establishment and development of Ife even before Oduduwa/Oranmiyan dynasty

Research on this issue is on going sir", he concluded.

This exercise is not meant to waste your time. It is, rather, purposed to ginger something in you as a so-called Yoruba or Omo Oduduwa.

Who named you Yoruba other than the colonialists who packed different people together and imposed a tribal name on them despite variation in their languages ( now known as dialects of the strange language of the strange people (Yoruba).

Our ancestors were Oke-Ogun, Oyo, Egba, Ijebu, Ekiti, Ijesa etc and that was the basis of the so called internecine war. We couldn't have fought one another if we were the same people. We were different peoples haulaged into the Niger Company.

My interest is particularly my Oke-Ogun people who are neither Omo-Oduduwa because they lived before Agboniregun and along with Agboniregun and long before Oduduwa nor Yoruba. A father CANNOT possibly be a child to his own child. We are also not Yoruba except for the sake of the peace which makes us also answer Nigerians. It is, therefore, logical that a people (Oke-Ogun people) who played SIGNIFICANT ROLES in the establishment of Ife CANNOT POSSIBLY ORIGINATE FROM IFE.

We are therefore not Omo Oduduwa.
That reminds me of the political jingoism of Oduduwa Republic and the big fraudulent joke about secession from Nigeria. How can fake get away from fake? It is no longer RESTRUCTURING, but secession and the comedian-in-chief is a Professor.

I do not wish to honour a jobless political Professor with a challenge because it is a waste of time. Someone who doesn't interrogate his own existential facts is not fit to defend a paid political position.

Anyway, anyone is free to propagate anything in Nigeria especially with huge dollars for grab. My own contention is that whoever chooses to go mad should not come near my people. Oke-Ogun people have never been and will never be Omo Oduduwa. Ori o no didi laelae. COUNT US OUT.

Azeez is a professor of English at the University of Abuja, Nigeria