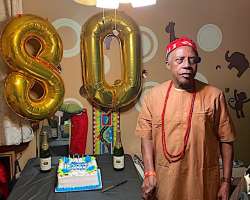 The Royal family of HRH Eze Josiah Osuji, the traditional ruler of Obi Mbieri autonomus community has threatened court action against subjects, Adolphus Osuji and Onwu Jesford who called him a foster son of Osuji family and accused him of stopping their mother’s burial with armed military men and thugs, describing the accusation as not only false but defamatory.

Adolphus Osuji had raised dust by publishing in both national and local newspapers as well as online news blogs, calling HRH Eze Josiah Osuji, the Traditional paramount ruler of Obi Mbieri autonomous community in Mbaitoli unprintable names , which drew the anger of the Royal family and the people of the said autonomous community.

HRH, Eze Osuji had also rebuffed the accusation, saying he knew nothing about a burial let alone hiring armed men and thugs to stop the event. Meanwhile, he revealed that his accuser, Adolphus Osuji was rather a servant who he has extended so much goodwill, having empowered through his businesses.

NewsTrack Nigeria had also reported that Adolphus had been advised by the elders of the community to heed to the magnaniimity of the traditional ruler who had extended a goodwill by promising to aid him to purchase a land he can call his own and where he can go and bury his mother. However, the elders were angered by his decision to blackmail a man who accepted him as a son and has helped him to get to where he is in life.

Piqued by the detestful stir Adolphus and one Onwu Jesford's action has caused, the children of the Traditional Ruler with other members of the royal family have threatened to seek redress in the court of competent jurisdiction to ensure that the duo are brought to book.

While describing allegations of Adolphus and Jestford as tissue of lies, baseless and an orchestrated defamation agenda, they have issued a seven-day ultimatum to the duo to retract the said publications and tender and unresered apology.

In a letter through their counsel, Barr Ikechukwu Nwaopara dated 30th of August 2020 and addressed to the said Adolphus Osuji and one Mr Onwu Jesford, the children of the said paramount traditional ruler frowned at the said publication by Adolphus Osuji against their father wherein their father was described as a foster son of Osuji family alongside their other serious false, baseless and unsubstantiated allegations therein by the said Onwu Jesford. The letter further stated that the said publications are defamatory and the family cannot tolerate such defamatory publications, especially concerning the status of their father as the traditional ruler of Obi Mbieri autonomous community in Mbaitoli local government area of Imo State, Nigeria.

The letter warned that failure of the said Adolphus Osuji and Onwu Jesford to retract the said publication and tender and unreserved apology, a serious legal action shall be instituted against them to serve as a deterrent.

On 23rdand 24th August, 2020, the embattled Adolphus Osuji had made publications on Daily Post.ng, the Big Truth Newspaper, Imo Breaking News, the Community Watchdog Newspaper and Statesman among others, accusing HRH Eze Josiah Osuji of stopping their mothers burial armed military men and over twenty thugs. The said Adolphus Osuji further described the said Traditional Ruler as a foster son, which sparked off the ongoing outrage in the Osuji dynasty.