The Disinvitation Of El Rufai By The Nba 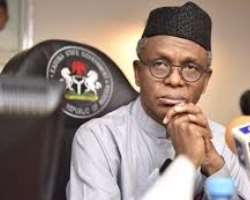 Mallam Nasir El-Rufai came into the public limelight in 1999 when democracy returned back to the country after a sixteen year hiatus of military misrule.

The then President Olusegun Obasanjo made El-Rufai the Director-General of the Bureau for Public Enterprises (BPE) which was saddled with the gargantuan responsibility of disposing some of the assets hitherto held by the government to private investors.

It was as the Minister of the Federal Capital Territory that his name became permanently etched in the minds of many Nigerians as he had the ambition of restoring the original master plan of the city. Many houses including those owned by prominent Nigerians were bulldozed as the then diminutive minister spared no one and took no prisoners.

Some of his die-hard supporters pushed his name forward as a possible successor to Chief Olusegun Obasanjo in 2007 after the alleged failure of the latter’s third term bid. For some reasons best known to Baba Iyabo as the former President is fondly called, he settled for the Late Umaru Musa Yar’adua who was then governing Katsina state.

El-Rufai went into political winter for eight years after his former boss’s Presidency and he was hounded by the Economic and Financial Crimes Commission (EFCC) to give an account of his eight year stewardship especially as the minister. He went on to write his memoir – ‘The Accidental Public Servant’ which was an interesting read even though some critics accused him of hagiography.

He became the Governor of Kaduna state in 2015 after defecting to the All Progressive Congress (APC) from the Peoples Democratic Party (PDP) where he was one of the foundation members.

Kaduna – the melting pot for many northerners has been under siege by the Fulani herdsmen and bandits. Southern Kaduna where the majority of Christians reside has been under severe attack since 2011. Many indigenes of there have been mindlessly slaughtered and hundreds of thousands displaced from their ancestral homes.

The bone of contention is about lands and the desire by the Fulani settlers to create emirates there.

One would have expected El- Rufai to act as the father of all but instead his divisive and bigotry side has shown in the handling of the crisis. He went as far as accusing leaders of Southern Kaduna of masterminding the killings so as to continue to get paid by the government alluding to an allegation that the practice was popular before he came into office. Up till date he has refused to visit that part of the state.

The technical committee for conference planning of the Nigerian Bar Association (NBA) decided to invite El Rufai as a keynote speaker for their forthcoming conference.

In the opinion of the NBA he was well suited to speak on the subject matter as Kaduna is the hub of many tribes and the two major religions of the country.

Some members kicked against his invitation opining that he had no respect for the rule of law and that his statements with regards to the crisis in his state were rather inflammatory and dismissed him as a bigot.

While the NBA may have their shortcomings especially with regards to their last elections which saw one of the presidential contestants, Dele Adesina SAN cry foul, I totally agree with them for rescinding their earlier invitation to the diminutive Kaduna state governor.

El Rufai has proven not too be the father of all with regards to the way and manner he is handling the crisis in Southern Kaduna. His statements as earlier written above shows that he is petty and vindictive. Don’t human lives matter? Are the indigenes of Southern Kaduna second class citizens in their homes? Has he condemned the ploy by the Fulanis resident there to subject the real owners of the land to eternal servitude and suppression in their attempt to create an emirate there? Is he too big to visit a part of the state that has been surreptitiously balkanized by frequent pogroms? These are critical questions urgently begging for answers to which he must give reasonable answers too.

The NBA is a highly respected professional body and shouldn’t be the platform for a wanna be ‘intellectual’ in the person of El Rufai to speak effusively on a topic that he has no genuine intentions of implementing in his base. Charity should indeed begin at home. He shouldn’t just talk the talk; he should also walk the talk as action speaks louder than words goes the age-long aphorism.

The apology to El Rufai by the outgoing NBA President Paul Usoro SAN is rather unfortunate as it casts a gargantuan slur on the personality of the Bar’s numero uno helmsman. Why couldn’t Usoro stand by the decision of the NBA? What was the sense in his eating his words and going back to his vomit? It’s really tragic for a learned man to behave like a school lad who has been reprimanded by his teacher for misconduct.

The NBA’s platform – a veritable tool for social change shouldn’t be graced by individuals who have disregard for the sanctity of human lives and peaceful coexistence with people of other tribes or even nationalities.

The new slogan globally is that of diversity and inclusiveness which has no place for bigots and small minded people. The beauty of the United States is that it is a land peopled by citizens and nationals of divergent tribes, creed and religion. Agreed, the history of both Nigeria and the US is different in the sense that in the latter, there was the voluntary amalgamation of people who left their former places of abode and thronged in droves to the New World; that of Nigeria was through the use of force in the 1914 amalgamation by Lord Frederick Lugard. It is never too late to still live in peace as we must permanently exorcize the ghost of Lugard which still haunts us till this day.

I hope that the incoming leadership of Olumide Akpata whose mandate was made possible by many younger lawyers upholds El Rufai’s disqualification so as not to send the wrong signal to the rest of Nigerians that bigotry pays.

It is high time that Nigerians ‘take it back’ apologies to the campaign slogan by Citizens journalist, Omoyele Sowore. We shouldn’t create platforms for divisive elements to spew out gibberish in the name of freedom of speech and expression. We recall that the 1994 Rwandan genocide which consumed millions of its citizens in just three months was as a result of hate speech accentuated through the power of the radio by both Hutu and Tutsi leaders.