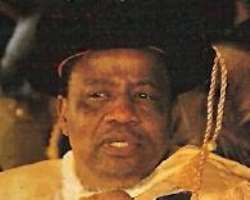 The group stage of the soccer fiesta in South Africa gave Nigerians some relaxing moments. It enabled them have some distraction from the dangerous and bewildering political machinations going on in their country. Amidst the high decibel output of the vuvuzelas, General Ibrahim Badamasi Babangida (Rtd), one-time military President of Nigeria went to the sleepy old town of Okija in Anambra state to receive an honorary doctorate degree from a Madona University there. The chancellor and proprietor of the university, Rev. Fr. Emmanuel Edeh, promptly warned political pundits that the conferment of the title on Ibrahim Babangida should not be tainted with politics; that it was in recognition of the former military president's official stance which pioneered the emergence of today's private universities in the country.

After the Okija event, musical bands were arrayed at nearby Ihiala to entertain the August visitor. Apart from a motley gathering of politicians, the crowd was mostly composed of curious youths among whom were those who wanted to have a glimpse of the Maradonic politician who recently told them (perhaps unwittingly) that they were incapable of providing apex-leadership in their country. As expected, the retired general who had declared his intention to contest the 2011 presidential election used the occasion to sell himself to the electorate.

But the questions still linger. And they are legion.

Does it occur to IBB that given his recent political machinations, it is apt to state that he can be named the most divisive element in Nigeria today? Does a person in IBB's status not know that in this day and age, and given the turn of events in Nigeria, the hitherto abused PDP's zoning arrangement which he now champions, and which he is seen plotting to exploit for his political ambitions is a sure avenue to hand over the future of 150 million people to an inept president? Does he not know that the so-called North/South divide in Nigeria's political lexicon is an amorphous contraption cooked up by politicians scheming to share political perquisites? Does IBB not know that on the surface, the zoning arrangement may project fairness to all, but deep down, it is a phenomenon that entrenches divisions between Nigeria's ethnic groups? Does he not know that the type of divide-and-rule politics he is seen to be orchestrating is an antithesis to how political leaders can be chosen in a democracy? Note: it's no use advancing the deceptive argument that every country has its own sort of democracy; a democracy that is not a government of the people by the people and for the people is rueful.

More questions. Is General Babangida still not aware that a lot of time has passed since he stepped aside from power, and that since then, Nigeria and the rest of the world had gone through several political metamorphosis? Is he yet to embrace the principle of representative democracy? Does he not believe that it is people's votes this time that can catapult him to the most exalted office in the land? And above all, that those votes must come from not only the so-called North but also from the so-called South of Nigeria?

Furthermore, before politicians plunge into elective political contests, they first conduct a survey on their electability. Did IBB do that? Or is he merely scheming for a leeway to accentuate his much-vaunted king-maker role in Nigeria's leadership circles?

The main road to Okija! For a hindsight, all through the years Ibrahim Babangida led Nigeria, the Ozubulu-Okija section of the Onitsha-Owerri road was in ruins. Local youths who dared to fill the deep gullies on the road were chased away on the basis it was a federal road. All pleas to the IBB-led government to redo the road fell on deaf ears. Today, much of that same section of the road is yet to be completed after many years of work kicked off by the Obasanjo-led administration to convert the main road into a dual carriageway.

History is replete with military dictators who transformed their countries for good. The good and bad of the Babangida-led junta is beyond the scope of this narrative, but if there were any good deeds of the junta, they were totally eclipsed by the woes it visited on Nigeria.


Disclaimer: "The views/contents expressed in this article are the sole responsibility of the author(s) and do not necessarily reflect those of The Nigerian Voice. The Nigerian Voice will not be responsible or liable for any inaccurate or incorrect statements contained in this article."
Articles by ukpakareports.com
28-7-2010  Dora Akunyili’s Wild Tantrums Against Soludo28-6-2010  The Plot To Impeach Imo Deputy Governor: A Critique4-3-2010  Ezza-ezillo/ezillo: The Limit Of Unrest In Ebonyi State