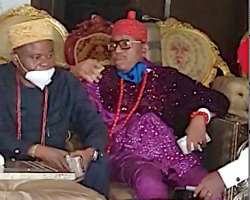 Oh Dear, Prince Arthur Eze, What Have You Turned Anambra Traditional Rulers Into?

This is a sad moment. Igbo billionaire, Prince Arthur Eze, has shown that he has no regards for Igbo revered traditional institutions. Prince Arthur Eze allegedly released N250,000 each to the thirteen Igwes for their transport to Abuja with promise of N2million in Abuja but the notorious Uzu Awka shortchanged them and gave each N200,000 instead and ducked from the trip. Following the botched trip, Arthur Eze reneged on his promise of N2million per traditional ruler and gave the twelve royal renegades N500,000 each.