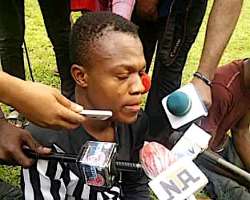 A Pastor with Living Faith Church, also known as Winners Chapel Pastor Joseph Anthony, has been arrested by operatives of the Imo State Police Command for allegedly raping Favour Chikanma, 11-year-old daughter, of a fellow pastor.

According to available information, the pastor had just been posted to the town and was offered temporary accommodation by his fellow pastor when the incident happened.

The Imo State Commissioner of Police, Isaac Akinmoyede, who paraded the suspect on Monday, said the incident happened at the Njaba chapter of Winners Chapel, founded by Bishop David Oyedepo.

The pastor, however, denied complicity, but admitted that he was tempted to commit the act. Pastor Joseph Anthony
According to him, he had just been transferred to the Njaba chapter of Winners Chapel and was waiting to be assigned his residential apartment before another Pastor offered to harbour him until he secured his own accommodation.

Police statements reads: "On 13/07/2020, one Pastor Joseph Anthony ‘m’ of Living Faith Church of Njaba was arrested for the defilement of one Favour Chikanma age 11yrs; the daughter of his fellow pastor, one Pastor Chukwuma Okoronkwo.

Investigation is at advanced stage. He will be charged to court accordingly".