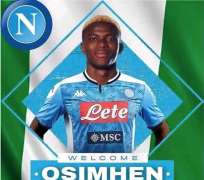 The Super Eagles striker joined Napoli from Lille for a club record fee of €50 million, potentially rising to €80 million.

Osimhen enjoyed a breakthrough first season in France scoring 18 goals in 38 appearances for Lille before the league was brought to an abrupt end due to the outbreak of coronavirus.

De Laurentiis believes Osimhen has the potential to become a star for Napoli also citing the reasons the club splashed out such amount of money on him.

“It is certainly a costly investment, but he is a strong striker who our sports director [Cristiano] Giuntoli advocated,” De Laurentiis told Corriere del Mezzogiorno. “He is a 30-goal striker.

"I met him and he made an excellent impression on me, I hope he quickly settles in our championship.”

He also hailed the roles of the club's sporting director, Cristiano Giuntoli in the signing.

“De Laurentiis told him what is expected of him and he immediately put him at ease with regards to the project. Giuntoli was the key man, he worked hard, non-stop phone calls to convince the player.

“He also had single talks with Gattuso, with whom he immediately developed a great feeling. Special mention also for Maurizio Micheli, one of Giuntoli's collaborators.”