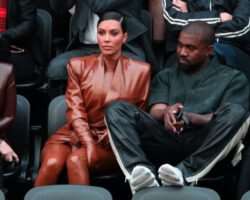 Taryn Ryder Writer, Yahoo Entertainment
Kim Kardashian has returned home to Los Angeles after her “emotional” reunion with Kanye West . Now, she's reportedly “torn” over whether to divorce him.

The Keeping Up With the Kardashian star visited her husband at the family ranch in Cody, Wyo., Monday after being apart for weeks. The couple's marriage is “strained,” a source tells Yahoo Entertainment, amid the rapper's presidential run and ongoing mental health issues. So, [the visit] was very emotional.”

Kardashian returned home Tuesday and is now reportedly “torn” over whether she should end the marriage.

As a source told People magazine, the reality star “feels that she has tried everything.” However, “She isn’t getting back what she needs from Kanye. She was to the point that she flew to Cody to basically tell him their marriage is over and to say goodbye.”

The source added that West wants to save the marriage yet, West “hasn’t changed anything that she told him needs to change.” Almost like, “He doesn’t seem to get what she is saying.”

As a result, “Kim is very torn. The last thing she wants is to be divorced with four kids. She knows that she will be fine financially, but her concerns are the kids and the partnership. She is moving towards a divorce, but who knows if she will actually sign papers.”

Meanwhile, another report, in Us Weekly , states that the pair have been living apart for a year — since West bought and moved to the Cody ranch.

“Kim goes about once every five weeks and brings the kids,” a source told the magazine. “When together, things are fine between them but they haven't been spending time together because he moved his life completely to Wyoming and that's not where their life is,” noting the kids attend school in L.A.

Kardashian, 39, flew to Wyoming on Sunday after West's public apology. “I would like to apologize to my wife Kim for going public with something that was a private matter,” he tweeted on Saturday. “I did not cover her like she has covered me. To Kim I want to say I know I hurt you. Please forgive me. Thank you for always being there for me.”

At a campaign rally in South Carolina earlier this month, West told the crowd he and Kardashian considered having an abortion when she was pregnant with their oldest daughter. The revelation left Kardashian “ truly shocked ,” a source told Yahoo, noting that she was both “worried and upset.” The 43-year-old rapper then went on multiple Twitter tirades about Kardashian and his mother-in-law, Kris Jenner. In one tweet, he said he's “ been trying to get divorced ” from the KKW Beauty mogul for two years. They have been married since May 2014.

According to another People report, Kardashian feels “trapped” in the marriage. “This is a very sad time for her,” a source said. “She loves Kanye and she thinks of him as the love of her life. But she doesn’t know what to do.”

The magazine also reported Kardashian “urged” her husband not to run for president during their visit, per an insider, “but he won't listen.”

West, who has been diagnosed with bipolar disorder, publicly declared he's “doing well.” He has a team of people around him in Wyoming and has welcomed visitors like Dave Chapelle and Justin Bieber.

Last week, Kardashian made a public plea for “ compassion and empathy ” as her husband's comments grabbed headlines.

“As many of you know, Kanye has bi-polar disorder,” Kardashian began. “Anyone who has this or has a loved one in their life who does, knows how incredibly complicated and painful it is to understand. I've never spoken publicly about how this has affected us at home because I am very protective of our children and Kanye's right to privacy when it comes to his health. But today, I feel like I should comment on it because of the stigma and misconceptions about mental health.”

She continued, “Those that understand mental illness or even compulsive behavior know that the family is powerless unless the member is a minor. People who are unaware or far removed from this experience can be judgmental and not understand that the individual themselves have to engaged in the process of getting help no matter how hard family and friends try.”

Kardashian said that being bipolar “does not diminish or invalidate his dreams and his creative ideas, no matter how big or unobtainable they may feel to some. This is part of his genius and as we have all witnessed, many of his big dreams have come true.”

“We as a society talk about giving grace to this issue of mental health as a whole, however we should also give it to the individuals who are living with it in times when they need it the most,” she concluded. “I kindly ask that the media and public give us the compassion and empathy that is needed so that we can get through this. Thank you for those who have expressed concern for Kanye's well being and for your understanding.”