Magu insists on hisinnocence, denies all allegations against him 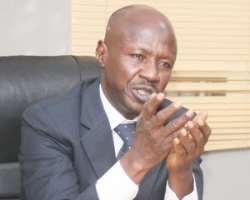 Akinola Ajibola
The suspended acting chairman of the Economic and Financial Crimes Commission (EFCC), Mr Ibrahim Magu, has given a detailed response and defense of the petitions and allegations leveled against him.

In his defense document obtained by Channels Television on Thursday, Magu denied all the claims as untrue and a calculated attempt to tarnish his name.

According to document, the suspended EFCC is denying any fraudulent dealings, insisting that not a dime of the recovered funds was fraudulently converted for his personal use and challenged his accusers to produce evidence of such fraudulent conversion.

He also questioned the issues being raised over the powers of his office as chairman of the anti-graft agency to initiate criminal prosecution.

Magu said that the power to prosecute cases was not what he could arrogate to himself and before he was appointed acting Chairman of the commission, the agency has constantly exercised its statutory power to institute criminal charges where prima facie evidence was made out without seeking for the consent of the Attorney General of the Federation (AGF).

He said that the various decisions of the Courts of Appeal were to the effect that the agency does not need the fiat of the AGF to institute criminal charges.

According to him, he has repeatedly sought the details of allegations and petitions against him personally and through his lawyers, but the request had not been obliged to date.

Magu, who is being investigated by a presidential panel led by Retired Justice Ayo Salami over allegations of gross misconduct in activities of the EFCC under his watch, was arrested detained on July 6, over allegations raised against him by Attorney General and Minister of Justice Abubakar Malami.

He said that while the panel has insisted that he was before it not an accused or a suspect but only as a witness, he has yet to know what the issues or who the persons were.

In his letter, he specifically responded to the three important issues bordering on the Report of the Presidential Committee on Audit of Recovered Assets (PCARA), Memo of the AGF to the President against him, and the alleged petitions addressed to the AGF which he said were already in the custody of the panel but not served on him.

The embattled former EFCC vehemently debunked claims that assets were sold and the proceeds thereof converted by the EFCC under his watch.

He also denied threats issued to judicial officers by him or the EFCC in the discharge of their official functions, adding that there was never a lack of transparency in the management of recovered assets under his leadership of the commission.

According to the suspended EFCC boss, there has been no diversion of proceeds from recovered assets or personal enrichment on his part.

Contrary to reports, he accused the office of the AGF of interference and being less cooperative and supportive of the process of recovery and management of assets.

In conclusion, Magu informed the panel that all his actions were documented and followed the prescribed procedures with necessary approvals.

He insisted that he was innocent and has served his country to the best of his abilities with all sense of responsibility and integrity.

The Rainbow with Channels Tv