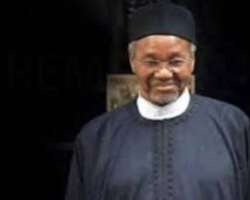 The Rainbow
Social cultural groups and prominient persons in the country have been reacting to the call by President Muhammadu Buhari's nephew, Malam Mamman Daura, for the 2023 presidency to be based on competence rather than rotation between North and South.

In an interview with the BBC Hausa Service, Daura who is regarded one of the President’s closest confidant, urged Nigerians to embrace competence, and not zoning, in determining the next president in 2023.

But major cultural groups in the South and Middle Belt – Pan-Yoruba socio-political group, Afenifere; apex Igbo socio-cultural group, Ohanaeze Ndigbo; the Niger Delta socio-cultural group, the Pan Niger Delta Forum (PANDEF); and frontline nationalist and leader of the South-south, Chief Edwin Clark, have reacted swiftly saying the nation stands no chance of moving forward except it ensures equitable distribution of power and restructuring of the country.

The ruling All Progressives Congress also distanced itself with the view, saying it represents his personal opinion, which did not represent the position of the party.

ThisDAY reports that Ohanaeze Ndigbo warned that equity should not be sacrificed on the altar of parochialism since it was the rotation sentiment that produced the incumbent.

The group insists it is the turn of the South, particularly Ndigbo, to produce the president in 2023.

“All we know is that it is the turn of the South where we have abundant competent individuals who can steer the ship of this country, particularly among Ndigbo,” the President General of Ohanaeze, Chief Nnia Nwodo,said via a statement by his media aide, Chief Emeka Attamah,

Nwodo added that it was unfair of Daura to seek an end to “rotation” after Buhari and the northern region had enjoyed two terms in quick succession.

“The truth is that Mamman Daura is not being a fair judge. Then, he didn't believe rotation should end. Now that he has tasted power through Buhari, rotation can end and the most qualified and competent can be voted in, discountenancing that the South-east has never tasted what he is drooling in.”

“By the way, who determines the most qualified and competent candidate? Is it as competent as the last one they gave the nation?

“It is indisputably the turn of the South, specifically the South-east,” he added.

He said one of the reasons northern politicians ganged up and removed former president, Dr. Goodluck Jonathan, from office in 2015 was over the claim of violation of the rotation principle.

He said: “Now that it is the turn of the South, they don't see it in that context anymore.

“Having benefited enormously from his nephew being the president, he now wants it jettisoned because it is the turn of the South.

“Are the service chiefs the most competent among their colleagues to warrant their being retained beyond their tenure? Now that it is the turn of the South, precisely South-east, he is mouthing most qualified and competent.

“Equity is a constant flagship for peace and good governance. Without it, there will be continued agitation and crisis.”

Spokesman of the group, Mr. Yinka Odumakin, said the Daura's interview had exposed the deceit of the North and its selfish agenda.

He said, “It is amusing to see those, who were singing zoning or tearing down of Nigeria before 2015, now becoming the apostles of competence after taking eight years. This is the most selfish orchestra.

“And this same group has opposed true federalism that would make people comfortable without rotation of the highest office in the land. With the unjust advantages of the Buhari's years, some of our compatriots are developing the idea that that is the best for the country to have without thinking of the implication.

“There is no hope for Nigeria under this structure. If we go back to federalism, the internecine battle for the control of the centre will definitely go down,” he said.

.
In a statement by its National Publicity Secretary, Hon. Ken Robinson, PANDEF described Daura's statement as not only insensitive but most unfortunate and unarguably capable of creating unnecessary tension in the country.

It sThegroup’s statement reads, “Nigeria is currently being confronted with grave challenges of insecurity, with attendant threats to the socio-economic fabrics of the country; lives and property of innocent citizens are being devastated daily, across the country. Surprising, that seemed not to bother the Northern leader, who is reportedly a close confidant of Mr. President.

“We expect people like Mamman Daura to speak, in ways and manner, that would promote national unity and cohesion, and not to make statements that would heat up the Nation's political space.

“Unfortunately, it appears he is more interested in who would take over from President Buhari in 2023.

“Perhaps, he needs to be told that the concept of zoning and rotation of political offices is correlated to the principle of federal character, provided by the Constitution, to promote political balance, and to address the problems of exclusion, marginalisation, under representation across the political zones, and power domination by any section of the country. No wonder the federal character provision of the nation's Constitution is being grossly abused by the Buhari administration.

“No region has a monopoly of competent people. But come to think of it, if anyone should talk of competence, at this time, should it be coming from them?”