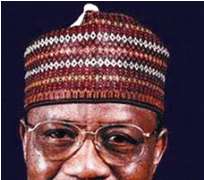 IBB
Third Republic senator and former acting governor of Katsina State, Alhaji Isa Kachako, has rejected the suggestion that the northern leaders that met in Abuja recently to confer on the crusade for power retention in the region were there on behalf of the people of the Northern Nigeria.

Kachako, a chieftain of the Peoples Democratic Party (PDP) told Daily Sun in Kano that the Northern politicians were only pursuing their ambitions to grab the presidency.

'For anyone to be speaking for the North, his consultation will be self-evident and far-reaching. The mandate to speak will come from all Northerners, including those Northerners in the rest of the 51 political parties. We cannot say this of the Abuja gathering because they are mostly of the PDP and their friends.'

He said that as a true nationalist, he is wary of the dangers of the current regime of ethnic, regional or religious politics which are implied in the tone and nature of the current debate on zoning, even as he acknowledged that zoning is neither in the Constitution nor in the electoral laws of Nigeria.

While not entirely opposing the present concept of zoning, he said that it should be a matter for the PDP members and PDP alone, being its weapon of power distribution and electoral success. He suggested that as a party instrument, any PDP member who does not agree with it, could leave to other parties to pursue his goals.

He agreed that a few northerners like the late Alhaji Mohammed Abubakar Rimi and Chief Barnabas Gemade bought forms in 1999 and 2003 presidential elections, which was supposed to have been zoned to the South. He added that it was the duty of the party hierarchy at that time to have sanctioned them for their act of violation of the agreed principle of the party.

He suggested that the PDP's leadership should meet and review the present challenge of zoning and power retention in the North, away from the public gallery, worrying that ever since the debate began, this kind of meeting has not been convened:

'Our party leadership, starting from the Board of Trustees, the national executive, and the leadership at the state level, they should all sit down and talk more on this zoning thing. Talk more with an open heart and come out with a resolution in the interest of all.'

He was delighted at the performance of President Goodluck Jonathan, stating that no matter what anybody would say wrongly  about him, he has demonstrated good faith by the quality of his policy actions, particularlly his refusal to sack the Service Chiefs, despite being under massive pressure to do so, and his nomination of Prof. Attahiru Jega as the Chairman of the Independent Electoral Commission of Nigeria (INEC) ahead of the choices of some of his supposed godfathers.