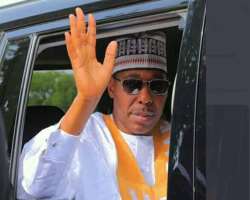 Unknown band of gunmen ambushed a convoy of the Governor of Borno, Babagana Zulum Wednesday in Baga, the Cable newspaper is reporting.

The governor survived. A security source told TheCable that the governor was on his way to some internally displaced persons (IDP) camps in the northern part of Borno when the incident happened.

Babagana Zulum, in February blamed Nigeria soldiers for a night attack by Boko Haram that killed over 30 stranded travellers.

In February 2019, suspected Boko Haram rebels attacked the convoy of the governor of Borno at that time Kashim Shettima’s convoy killing at least three people. Shettima’s convoy came under attack while travelling from state capital Maiduguri to Gamboru Ngala for a campaign rally.

Recently, a former governor of Borno State, Senator Ali Modu Sheriff's convoy was on Apr 25, 2020 attacked by the boko haram insugents as he was on his way to his father's funeral.