In Uganda Twilight For U.s.-puppet Gen. Museveni After 34 Years? 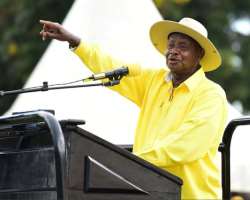 In Uganda, Africa’s most corrupt and brutal dictator, Gen. Yoweri Museveni, recently declared that he will be a candidate in the country’s general election in 2021. This means he plans to once again rig and steal the vote. He’s been in power for 34 years now and has stolen the last few elections.

The kleptocrat faces two primary obstacles. The Western countries that have backed him for decades as he danced to the puppet masters’ tunes—acting as regional sheriff in East and Central Africa—now keep him at arm's length. He was once the regional sheriff in East and Central Africa and he also was an enabler for Western corporations to plunder Congo’s resources through Uganda without paying that country’s weak central government. The second threat comes from Robert Kyagulanyi, 38, a young member of Parliament and musical star, who's better known as Bobi Wine .

Gen. Museveni has become dispensable to Washington. This is the fate of all puppets. It’s a historical certainty. Once the benefits of propping a despot outweighs the costs to the West, he’s jettisoned. The U.S. abandoned corrupt despot Ferdinand Marcos in the Philippines after 21 years in power, military dictator Augusto Pinochet in Chile was dumped after 17 years, Mobutu in Congo was shelved, after 37 years as his health faded and an armed insurgency closed in, and Hosni Mubarak was of no use after 30 years when Egyptians took to the streets.

Congo was once a killing field where Museveni could sponsor murderous armed militias—such as M23 . Museveni would then send in his national army under the claim that “instability” in Congo threatened Uganda’s security. Museveni used the invasion as a ruse to plunder Congo’s mineral wealth—together with some of his Western corporate partners—including its gold. Through the years the United Nations has published a list of some of these corporations that benefitted from Congo’s blood minerals thanks to the war-for-profit by Museveni. Recently The Wall Street Journal carried a story about how the Congo gold plunder continues even with the Covid-19 pandemic.

The U.S., which has schemed against Congo since the country's independence in 1960 seems to have decided to give new president Felix Tshisekedi a chance. This has denied Museveni the opportunity to promote genocidal warfare in Congo as he had in the past. As a direct result of the invasions from Uganda and the multiple mini-wars they spawned, an estimated six to seven million Congolese have perished. This holocaust is comparable to the decimation of Congo under the imperial rule of King Leopold II of the Belgians.

For sure Museveni is an unindicted war criminal and he’s aware of this too. In 2005, the International Court of Justice (ICJ) awarded Congo $10 billion in reparations as a result of the war crimes—mass rapes, massacres, plunder of resources— carried out by Uganda’s occupying army. The Congo referred the same complaint to the International Criminal Court (ICC), the same court that has convicted Sudan’s former dictator Gen. Omar Hasan al-Bashir. The Wall Street Journal carried an article on June 8, 2006, reporting that when the ICC prepared to launch its criminal investigation, Museveni begged then U.N. Secretary General Kofi Annan to block it . Annan, according to the Journal, said he had no such powers.

Museveni may fear that the investigation has only been suspended so long as Washington still has use for him. It’s one of the reasons why he’s also desperate to hold on to power. Museveni likely believes only the Ugandan presidency can shield him from ending up in a jail cell in The Hague. It would be ironic and just if both Museveni and Bashir end up before the ICC.

There’s also additional evidence that Museveni has become useless to Washington. Trump, even with his racist comments about Africa being a collection of “shithole” countries, invited a few African presidents to the White House, including Nigeria’s Muhammadu Buhari and Kenya’s Uhuru Kenyatta. Museveni, once a favorite of Washington, has not been invited. He was so desperate to ingratiate himself to the U.S. administration that after Trump insulted Africa, Museveni, in Uncle Tom fashion declared “I love Donald Trump.” Even then, Trump didn’t reciprocate the love and he wasn’t invited to the White House. Museveni did get to meet Trump “envoy” Kanye West.

Museveni’s kleptocracy has also been an embarrassment to his Washington sponsors in recent years. In 2018, a U.S. federal court trial in New York convicted a Chinese national, Chi-ping Patrick Ho, of paying a bribe of $1 million to Museveni and his foreign minister Sam Kutesa. The relatively modest bribe payment was a down-payment. In return for illegal oil concessions for a Chinese energy firm, the company, CEFC China was to set up a joint business venture with the families of Museveni and Kutesa, who is also his in-law. Photos of both Museveni and Kutesa —referred to as Exhibit #1510 and Exhibit #1504, respectively—were displayed in the courtroom during the trial. Ho was tried in the U.S. because he used a New York-based bank to wire half of the bribe money to Kutesa's account in Uganda.

So without U.S. protection what can dictator Museveni do?

About 80% of Uganda’s population is under the age of 35. In Bobi Wine, they now have a charismatic candidate whom they can rally around. The legendary opposition leader Dr. Kizza Besigye also has a powerful following, having won their support by bravely challenging Museveni at the polls in the past. The dictator has stolen at least three elections from Dr. Besigye. The opposition lineup includes Bobi Wine, Dr. Besigye, Mugisha Muntu the leader of the Alliance for National Transformation (ANT), and Norbert Mao of the Democratic Party.

Many people don’t believe Museveni will allow himself to be defeated in the polls. What are his options?

Orchestrate assassinations of the leading opposition figures? This would likely spark an uprising or even armed rebellion he would not be able to contain.

Rig elections and claim “victory” even after overwhelming defeat? This could also instigate uprisings that he won’t be able to contain.

Create insecurity by a mid-level assassination and then invite a regime-friendly coup d’tat? But military regimes are no longer accepted by the international community and the African Union would automatically suspend Uganda and other global sanctions would follow.

Find an excuse to invade one of the neighboring countries—he invaded Rwanda in 1990, Congo multiple times since 1997, and South Sudan in 2013—in order to create another humanitarian crisis as a pretext to postpone elections in Uganda? He could certainly cause a crisis by instigating warfare between South Sudan’s President Salva Kier and Vice President Riek Machar again—just as he did in 2013 and 2015.

But without a green light from puppet masters in Washington this would backfire.

One option for Gen. Museveni is to negotiate a non-prosecution and non-extradition deal with his rubber stamp Parliament before the elections to protect him from having to face trial for his crimes in Uganda and to preclude any attempt to ship him to the Hague for the Congo war crimes.

Even then, the question remains—would a post-Museveni government honor such a deal?