Attacks on me over NBC Code ammendments, baseless: Minister 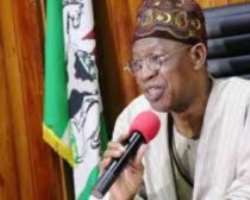 The Minister of Information and Culture, Alhaji Lai Mohammed has dismissed as “baseless,” the apprehension and attack on him over the recently ammended 6th edition of the National Broadcasting Code.The Minister who was a guest on NTA live Programme “Good Morning Nigeria” monitored by the News Agency of Nigeria (NAN) on Tuesday in Abuja, said the ammendment of the code was well intentioned.He said the amended code will reposition the broadcast industry in a manner that will benefit all stakeholders and practitioners.

“It is unfortunate that even those who would benefit in the new regime have been so carried away and confused by critics of the ammended code that they are also attacking us.

“Those we are protecting are those who are vociferous in our attack,” he said.

Speaking on exclusivity, the most controversial of the ammendments, the minister said the government rejigged the code to stop monopoly and boost local contents.

“Anywhere you have monopoly and exclusivity, growth is hampered particularly as it relates to local contents.

“We said, henceforth, you cannot go and buy a series or opera or rights for sports and refused to sell to Nigerians.

“For instance, if you buy Premier League, and a small operator approaches you to resell, you must resell to him.

“We will not dictate the price at which you are going to resell but you must resell at a price to be agreed by both parties.

“I want to say that it is only in Africa that you have exclusivity and monopoly of contents as a business model.

“In the UK, you watch premier league on any channel,” he said.

The minister said the code also ensures that, films, music, advertisement and series meant for consumption by Nigerians must be made in Nigeria.

“With the ammended code, you cannot go and make your advertisement, films or reality show outside Nigeria and bring it to play on our airwaves.

“Why must you go outside Nigeria to make a film or advertisement that can be done in Nigeria,” he said.

He said because TV stations and producers were being owe so much money, the code states that if an advertiser owe a tv station money, such advertiser cannot place advert on another channel until the indebtedness is cleared.

Mohammed said that contrary to what was being speculated, the ammended code is not to favour anybody but to benefit every stakeholders and practitioners in the industry. (NAN)