“i Was Warned To Never Watch Tb Joshua But God Used Him To Heal Me!” – Medical Doctor 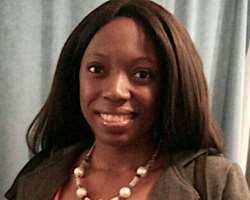 In a video posted to Emmanuel TV’s YouTube Channel, the popular Christian channel with 1.7 million subscribers, Dr Ataikiru Usiwoma revealed she suffered with an embarrassing case of bedwetting since birth. “It would surely happen every time I slept – daily or twice in a day,” Usiwoma explained, adding the problem persisted during her time in medical school in Ukraine and led her to being withdrawn and introverted.

According to Dr Ataikiru, a Ghanaian doctor advised her to watch Emmanuel TV but she was initially reluctant as she had been told TB Joshua was demonic from a young age and warned to never watch Emmanuel TV in her church in Nigeria.

“They said that if you even turned on the channel, the spirit could possess you,” she recounted.

However, when another Nigerian Pastor showed her a video equally saying negative things about Joshua, she felt a conviction to do investigations herself rather than relying on hearsay.

When she began watching Emmanuel TV, Usiwoma was ‘surprised’ to discover Joshua “calling the name of Jesus”.

According to her, “I continued watching it and prayed with Emmanuel TV and the bedwetting immediately stopped.”

The young doctor said she had not experienced any form of bedwetting for over six years, to confirm the authenticity of her miraculous experience.

“My advice is for anyone who is going through any situation that seems impossible - they should remember that with God, nothing is impossible,” she concluded.

In his remarks on the video description, Joshua stated, "Whatever negative comment people must have made in the past about me, God allowed it so that He can use it to speak strength and courage into my life. Man’s rejection provokes God’s direction. When man rejects you, God would start to direct you.”

Ihechukwu Njoku is a Nigerian writer on religious affairs...