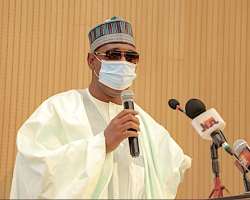 The book, “How I became Senator in 30 days” authored by Senator Sadiq Suleiman Umar, representing Kwara North Senatorial District, was presented to the public on Thursday in Abuja. The event, held at NAF Conference Center and Suites, Kado, Abuja was attended by minister of information and culture, Lai Mohammed, Directors Generals of Government agencies, and several Royal Fathers.

Zulum in his analytical review commended the author for the metaphoric title that would attract readers and for taking time to document his journey into the senate in a book of more than 200 pages. Zulum commended the simple language used by author and the recollection of events put in context.

Prof Zulum however made some critical observations while making copious reference to sections and pages in his mastery of the book.

Senate President Ahmed Lawan called on Senators to emulate the author by working towards the documentation of their stewardship to correct misinformation about operations at the national assembly. Senate President, Governor Zulum and other dignitaries displayed copies of the book to present to the public.

Governor Zulum has since returned to Maiduguri on Friday afternoon and has continued with activities of governance.