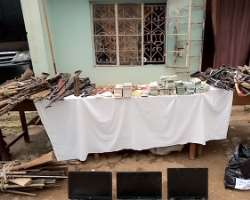 The Police Command in Kaduna State has announced the arrest of 207 suspected bandits, kidnappers, cattle rustlers and rapists.

The Commissioner of Police, Mr Umar Muri who made the disclosure at a news conference on Wednesday in Kaduna, said the arrests were made in the last few weeks.

Muri said that a number of recoveries were made which included, 41 guns, 1,113 rounds of AK47 live ammunition, 16 rounds of live cartridges, 26 empty shells of AK47 and 17 sharp knives and cutlasses.

He stressed that the command would continue to make the state uncomfortable for criminals and called for more support from the general public.

The commissioner recalled that the command, had between January to April 2020, arrested no fewer than 81 suspected criminals and recovered various exhibits of their crimes.

“So far; all the suspects paraded are being diligently prosecuted with a view to gaining conviction, thereby taking these criminal elements out of circulation in our communities,” Muri added.

He stressed that the command has zero tolerance to any form of criminality, and would pursue criminals wherever they may hide across the state.

According to him, the efforts of police personnel and other security agencies have made the security situation in Kaduna State to be relatively stable.

He added that it was also due to the continuous review of the operational strategies of the Command in collaboration with other sister security agencies and robust support and encouragement from the IGP, Mohammad Adamu.Muri appreciated the public for their support and appealed for more, by providing credible information through the command's phone lines: 08075391105 and 07039675856 .(NAN)