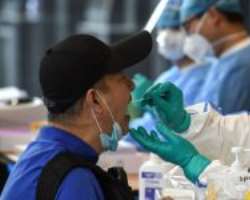 By Sangmi Cha/ Reuters
SEOUL (Reuters) – South Korean epidemiologists have found that people were more likely to contract the new coronavirus from members of their own households than from contacts outside the home.

A study published in the U.S. Centers for Disease Control and Prevention (CDC) on July 16 looked in detail at 5,706 “index patients” who had tested positive for the coronavirus and more than 59,000 people who came into contact with them.

The findings showed just two out of 100 infected people had caught the virus from non-household contacts, while one in 10 had contracted the disease from their own families.

By age group, the infection rate within the household was higher when the first confirmed cases were teenagers or people in their 60s and 70s.

“This is probably because these age groups are more likely to be in close contact with family members as the group is in more need of protection or support,” Jeong Eun-kyeong, director of the Korea Centers for Disease Control and Prevention (KCDC) and one of the authors of the study, told a briefing.

Children aged nine and under were least likely to be the index patient, said Dr. Choe Young-june, a Hallym University College of Medicine assistant professor who co-led the work, although he noted that the sample size of 29 was small compared to the 1,695 20-to-29-year-olds studied.

Children with COVID-19 were also more likely to be asymptomatic than adults, which made it harder to identify index cases within that group.

“The difference in age group has no huge significance when it comes to contracting COVID-19. Children could be less likely to transmit the virus, but our data is not enough to confirm this hypothesis,” said Choe.

Data for the study was collected between Jan. 20 and March 27, when the new coronavirus was spreading exponentially and as daily infections in South Korea reached their peak.

KCDC has reported 45 new infections as of Monday, bringing the country’s total cases to 13,816 with 296 deaths.