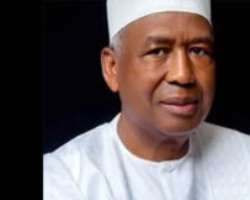 President Muhammadu Buhari is deeply grieved by the death of his longtime friend Malam Isa Funtua who passed away on Monday.

President Buhari in a statement by his media aide, Garba Shehu, said that Funtua's death has created a huge gap in his life.

Shehu in a tweet said, “President Muhammadu Buhari received with deep sadness on Monday evening information on passing of his longtime friend and associate, Malam Isma'ila Isa Funtua, who was Life Patron of International Press Institute and Newspapers Proprietors Association of Nigeria (NPAN).

“President Buhari believes the demise of the publisher and businessman has created a huge gap as Malam Funtua consistently stood by him in his political journey.”

Funtua, who was aged 78, died in Abuja while undergoing a routine medical check-up.

He was said to have suffered a massive heart attack during the medical check-up.

According to the Shehu, President Buhari while condoling with the late entreprenuer's family, prayed God to grant them the fortitude to bear the loss.