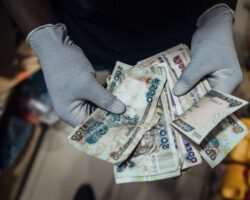 The naira's black-market rate declined to 472 per dollar on Monday from 465 naira on June 15, according to abokiFX.com, which collates rates from street traders in Lagos. That's the weakest since February 2017 and compares with 12-month forwards that traded at 456.65 as of 1:20 p.m. in Lagos. In the official spot market, the unit weakened 0.2% to 389 per dollar.

The Central Bank of Nigeria kept the benchmark interest rate at 12.5% on Monday to curb inflation and prevent a further weakening of the local unit. It devalued the official exchange rate earlier this month to 381 naira per dollar from 360.

“It's an adjustment process,” Governor Godwin Emefiele said after the rate decision. “We believe as dollars become more available and the liquidity in the market becomes more and more, what we will find is that the rate will appreciate

Lenders including Stanbic IBTC Bank Plc and Zenith Bank Plc further reduced the amount of foreign currency customers can spend outside the country. Zenith Bank cut its international spending limit on naira-based cards to $200 from $500 per month and suspended withdrawals from international automated teller machines. Stanbic IBTC lowered its monthly spending limit by a half to $500.

“A lot of the challenges right now are due to a shortfall in liquidity,” Douye Mac-Yoroki, an analyst at Lagos-based Investment One, said by phone. “The central bank is holding on to as much dollars as it can, given that inflows are not coming the way they did previously.”

Nigeria's dollar shortage was exacerbated by the outbreak of Covid-19 and lackluster prices for crude oil, which accounts for more than 90% of the country's foreign-exchange earnings and more than a half of its revenue. The Abuja-based central bank is struggling to clear a backlog of dollar demand by foreign investors, while manufacturers are finding it difficult to access the greenback to import raw materials.

Customers who can't obtain dollars from the central bank or other official sources are being forced into the parallel market, pushing that rate higher, Mac-Yoroki said. “A lot of pressure is piling up there,” he said.

For more articles like this, please visit us at bloomberg.com