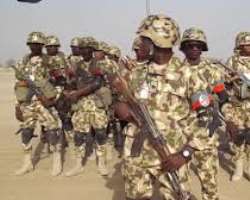 Troops of Operation Sahel Sanity has eliminated no fewer than 17 bandits and arrested a number of others in recent encounters in Katsina State, Defence Headquarters has disclosed.

The Acting Director, Defence Media Operations, Brig.-Gen. Bernard Onyeuko, disclosed this in a statement on Sunday in Abuja.

Onyeuko said the troops of Combat Team 1, had on July 18, with the support of Air Task Force advanced, captured a notorious bandits' stronghold known as Dangote Camp located deep in the forest in Jibia Local Government Area.

He said the initial resistance by the bandits was effectively subdued by the superior tactics and dexterity of the troops which resulted in heavy casualty on the bandits.

“At the end of the encounter, 17 bandits were neutralised while several others were believed to have escaped with gunshot wounds as evident by the trails of blood along their escape routes.

“Regrettably, one brave officer and two gallant soldiers paid the supreme price while four other soldiers were wounded in action.

“However, the wounded in action soldiers are currently responding positively to treatment in a military medical facility,” he said.

He disclosed that one of the suspects, Bashir Usman, claimed to be a policeman during interrogation but could not validate his claim with any form of identification.

According to him, Usman was apprehended with one AK 47 Rifle loaded with 28 rounds of ammunition while riding on a motorcycle.

Onyeoku said that other items recovered from Usman include one handset and the sum of N6,350, adding that all the suspects were presently undergoing preliminary interrogation.

The military spokesperson further disclosed that the troops had on July 17, made an aggressive pursuit of bandits following a tip off that bandits invaded Kuka Uku Village in Batsari and kidnapped a 16-year-old Miss Hadiza Sani.

He said the bandits abandoned the victim and fled due to the troops aggressive pursuit, adding that the rescued victim had since been reunited with her family.

According to him, troops deployed at Forward Operation Base Bagega also rescued another kidnapped victim, a 10-year-old girl, following an alarm by her mother that two bandits on motorcycle kidnapped the victim while they were fetching firewood around Bagega – Tudurki Forest.

“The rescued has been united with her family.
“The Chief of Army Staff Lt.-Gen. Tukur Buratai commended the troops for their gallantry, successes and their resilience and urged them not to rest on their oars but build on the successes so far achieved.

“He further assured the people of the North-West zone of the Nigerian Army's commitment to the safety of lives and properties within the zone,” he said. (NAN)