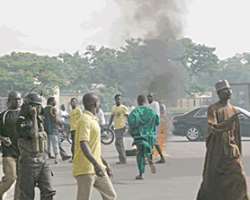 Some youths making bonfire to protest the resumption of the Deputy Governor of Bauchi State, Alhaji Garba Gadi on Monday

The Anambra State Chairman of the Action Congress (AC), Chief Ndubuisi Nwobu, escaped death by the whiskers on Sunday when unknown gunmen shot and abducted him in Awka. The incident made politicians in the state jittery as many are complaining of receiving threat text messages from suspected kidnappers and killers, especially in Awka metropolis.

The incident, according to family sources, took place along Ifite Awka Road at about 8.00 p.m. on Sunday while the chairman was driving in his Toyota Camry car. He was suddenly waylaid by the gunmen, operating in a RAV4 Sport Utility Vehicle (SUV), who allegedly shot at him severally before whisking him away in their vehicle.

Daily Sun gathered that another victim of the gunmen, who they had earlier abducted took advantage of the confusion of the shooting and dragging of the chairman to jump out of the vehicle and fled.

He was said to have been released in the early hours of yesterday at Oji River in Enugu State but not without the payment of N1.2 million ransom at the end of the negotiations which started with N10 million.

Nwobu, who, according to a source, almost died, following excessive loss of blood from the gun wound, however, did not sustain any bone injury, according to the medical doctor that examined him.

When Daily Sun visited the private hospital where he is receiving treatment in Udoka Housing Estate, Awka, many of his political associates had besieged the hospital to see him but a family member said he was undergoing blood infusion, while plans were being made, to transfer him to one of the teaching hospitals around.

The source stated that he was brought to the hospital in the early hours of yesterday while his car had been moved to the Central Police Station (CPS), Awka. The state Governor, Mr. Peter Obi, the Speaker of the State House of Assembly, Chief Anayo Nebe, and the State Commissioner of Police, Mr. Philemon Leha, had already visited him.

Confirming the incident to newsmen yesterday, Leha said there was confusion where to place the perpetrators of the act as to whether they were assassins or kidnappers, noting that kidnappers do not shoot their victims but would rather take them to their hideouts for release after ransom must have been paid.

He said, 'When I visited him at the hospital, he was still fast asleep. Until he wakes up and we hear from him, I will not be able to say for now what transpired'.

The State Police boss noted that the command was awake throughout Sunday night, searching for the gunmen everywhere in the state but assured that having positioned them at strategic places to forestall further occurrence, the perpetrators would be caught.

He said, 'My assurance to the people of the state is that, perpetrators of this act will not go unpunished.'

Meanwhile, Governor Obi had said that the state government was determined to make life uncomfortable for criminals in the state as the efforts of government in that direction were bearing fruits.

Obi, who, according to his Special Adviser, Media and Publicity, Mr. Val Obienyem, spoke at the hospital where he visited Nwobu said: 'You can see that in the past one month, the kidnappers and those who are trying to terrorize our society are not finding things easy. The police and security agents are doing their job and things are improving.'

The Governor described the insinuation in some quarters that the kidnap was politically motivated as sheer wickedness, pointing out that those behind it had no respect for human life, hence their playing politics with other people's travails.

But reacting to the incident yesterday, the Action Congress decried the level of insecurity in the state stressing that it was an ill wind that blows nobody any good.

In a statement by the State Publicity Secretary of the party, Mr Christian Udoka, the party noted that it had consistently cried against insecurity in the state, stressing, 'Today it is the AC chairman and tomorrow, it could be another person'.

He pointed out that security of lives and property was the primary duty of the state governor as the chief security officer of the state, insisting that the governor should take the matter serious before the entire Anambra people would flee from the state.