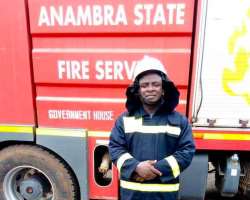 To checkmate fire incidents, the Anambra State government has fortified the fire service unit of the Ministry of Public Utilities to respond promptly and effectively whenever the need arises.

Speaking at the second edition of "Meet the Media" organised by the Governor's media team which was held at the Anambra State Secretariat on Monday, the Commissioner for Public Utilities, Engr. Emeka Ezenwanne enumerated 25 key achievements of the Obiano administration in Anambra Fire Service and hinted that the governor is set to make Anambra Fire Service an agency of government for greater efficiency and enhanced performance.

Preparatory to the upgrade, the governor appointed AVM Ben Chiobi as the Managing Director of the Fire Service and also improved the staff strength of the unit with the immediate employment of 120 fire fighters .

Mr. Ezenwanne revealed that the Obiano administration has reviewed the monthly hazard allowance for fire fighters in the state from N10 to N20,000 with periodic trainings and opportunities for capacity building.

"We've provided 13 Utility vehicles , refurbished more than 15 Units of fire trucks, bought 5 new ones from Innoson and approved renovation of their offices", he added. In cognizance of the importance of water supply to fire fighting, the scale of intervention which extends beyond parts of the state that recorded fire incidents in 2019 also covers likely vulnerable places including some water installation in ochanja 1 & 2, Main Market, Ose Market and the Marine Market.

He revealed that deeper synergy between the Anambra State fire service and the Federal fire service has yielded the provision of two additional fire trucks stationed at the Amawbia Fire Station.

Acknowledging the importance of proactive fire prevention, Mr. Ezenwanne said that what happens within seconds or minutes after a fire starts determines the scale of the outbreak noting that the most effective approach is to provide fire fighting kits to enable the security man or anyone closeby to swing into action before firemen arrive.

"So, when you do this reticulation you provide water hose and water hose rail. If there is a fire outbreak, all the security man needs to do is to pick the hose rail and open because the water is pressurized for instant fire fighting", he noted.

He further hinted that when the greater Onitsha water scheme finally gets up, fetching points will be provided for refilling of fire trucks for seamless operations.