The Duplicitous Harris Chuma-Odili and his Odious Gamble with Letter Writing: of popularity and notoriety. 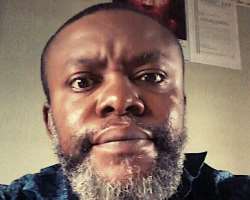 In recent time, Harris Chuma has demonstrated his knew found love for letter writing. He would write the Wife of the Governor of Anambra State thusly: “Osodieme, do not Reject Ndi Ogbunike” – proudly making the letter a public document. Erroneously concluding that the relative public silence over the hogwash meant its endorsement, he would engage Gov Willie Obiano himself with a sequel - again in public space. His trumped-up grouse on each count: crass abandonment of Ogbunike town by Chief (Mrs.) Ebelechukwu Obiano, Wife of Anambra State Governor; Chief Willie Obiano, Governor Anambra State, and the Obiano administration. Balderdash!

“Which Obianos and Obiano administration abandoned Ogbunike?,” ndi Ogbunike promptly queried. “When, in the history of Ogbunike has the town and her people received as much attention as the government of Akpokue has so far given us?” “Did Ogbunike not produce the third citizen in Nigeria in Chuba Okadigbo? Do we suffer any shortfall in the assembly of the wealthy in Anambra?” “Have our sons and daughters not occupied privileged public offices before now?” “Now, tell me who among all these has done anything for our people in comparison with Akpokue’s government.” “What comparison can ever be contemplated, given the unprecedented volumes of empowerment our people enjoy from this government; the infrastructural uplift we enjoy in critical interventions like road construction typified in Ugwu Nwasike-Azu Ogbunike, Amawa-Osile-Ifite-Umueri-St. Monica-Ogbunike Cave Road; Oye Olisa Road, High Court and Magistrate Court roads; not discounting Kisa bridge and the palliative enhancement done the long stretch of the Cave’s steps, pending anticipated take-off of its comprehensive reform/upgrade?” “By the way who is Chuma to assume the voice of Ogbunike?” “O kwa nnwaa aputanwuro okuko akwu ka ayi ga aya tinyelu Covid kana enye uwa isi owuwa?” “Idi sure na anya nnwaa adiro n’oche Okpala Anaedo? I ma na anyaukwu na mpako ya enweghi ngwota.”

The above were some of the reactions of ndi Ogbunike against the scathing assumptions of Chuma Harris.

Evidently, avarice, mischief, resentment and envy, other than culpable survival instinct or any vestige of patriotism, have taken prisoner of Harris Chuma, a Nollywood chief claimant from Ogbunike who is better known as a media charlatan on rampage in the social media space.

When Harris haughtily assumed a dedicated mouthpiece that propagates and projects the sensibilities of the noble clan of Iguedo, not a few watchers suspected foul play. His miserably beggarly, uncouth and indecorous delivery of the self-assigned responsibility quickly confirmed the thought of many that the motive of the adventure was grossly self-serving and injurious to the Ogbunike community which his acts are unduly exposing to public odium.

An exemplification of a butterfly assuming itself a bird, Chuma’s reputation for self-serving ego, greed, envy and grievous calumny broke loose recently after over a six year waiting for political appointment from his brother-in-law Governor. He chose to go off tethers after the recent appointment of Honourable Tony Muonago, Tony Oneweek, as a Special Adviser to the Governor on Diaspora and Tourism Affairs. That appointment fired the embers of hurt in Harris who quickly resumed flaunting his social media-hyped PhD as marking him as a preferred candidate for such appointment. He recently was heard sulking over the long stay of Bob-Manuel Udokwu and other notable Nollywood fellows in Gov Obiano’s government, saying that “Onye okwa rilu ji ya kotakarisilu ji. Of what value is an in-law who would not allow me a bite from the allurements of government? Abeg!”

Of course Harris “PhD!” adjudges himself superior to other associates in Akpokue’s government, and so finds it extremely hard to come to terms with the “exclusion” he suffers. Nobody yet told him that apart from the fact that everyone, not minding their claims to ultimate expertise, must not and cannot be in government before they can add value to humanity; his inexplicable vain disposition may well be a limiting overhang.

In his desperation to get even with both sister and in-law, Chuma Harris has despicably opened himself up as a low hanging fruit for a horde whose contrivances are tailored towards pronouncing failure on Gov Obiano’s administration. But ndi Anambra have repeatedly demonstrated their preferences for the unprecedented safety they enjoy, the critical interventions on roads and ecological challenges, the superlative performances of students, teachers and schools of Anambra in national and international competitions, the revolution in agriculture and the entrepreneurial mentorship the youths of the state enjoy under the watch of Chief Willie Obiano’s government.

Indeed no Chuma Harris, no calumny will derail the people’s choice for Akpokuedike and for the All Progressives Grand Alliance, APGA.

What justification does the butterfly regaling on petals have lending the gait and compliments of an eagle’s supreme flight upon itself? The discrepancy between the two flying beings compares to that between notoriety and popularity. The difference cuts clear!