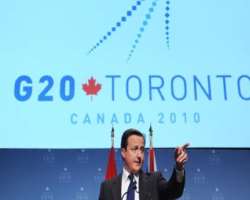 
It’s a cause for concern: when others see so much, and those who should be in charge see nothing. The 'others'ã€€is the gathering of leaders from industrialized nations. Those who should be in 'charge' are the six African countries invited to the G8 Muskoka Summit on June 25-26 as well as the G20 Toronto Summit on June 26-27, 2010.ã€€The cities of Huntsville and Toronto in Canada are the venues. Both meetings had Africa in focus. The continent’s development affairs were high up on the agenda. That Africa is a development partner, and not a development problem, was the voice on the rooftop. Then they sat, reviewed the continent’s progress, talked about the way forward, after which they dispersed and returned home.ã€€

The ground was prepared ahead of all that though. Two frontline Canadian newspapers – The Globe and The Mail - served as town criers. Both wrote on Africa for weeks before the G-8 and G-20 participants arrived. The Mail stated some nice things about the continent. "Africa’s moment" was the title of an editorial. In it the editors insisted they saw bright light, and not gloom across Africa, an effort to justify the African agenda at the summit. "It is time to see Africa another way, as an unshackled continent," the Mail wrote.ã€€ It didn’t stop there. "This century is being invented before our eyes, and Africa is the site of the greatest transformation." Then it rationalized its enthusiasm by insisting it was borne out ofã€€a "growing awareness that Africa is key to this century, a resource-rich and youthful continent that has found itself and is set to take on the world."

And the newspaper made figures available too: There is improving governance index on the continent, it stated. There is a one billion population that should rise to two billion in about forty years – a huge market by any standard. There is also the fact of US$63.6 billion that arrived the continent as foreign investment in 2008 alone, a higher figure compared to US$4 billion in 1995. The paper also cited some of the countries on the continent as having made significant gains in reducing poverty, infant mortality, increasing access to safe drinking water and expanding primary education. All this as part of the anti-poverty programs of the Millennium Development Goals (MDGs). The number of resources here were enumerated as usual. The Mail said ã€€"Africa, with its vast geographic advantages (the power of the Sahara sun, the flow of great rivers, and the geothermal potential of the Rift valley), resources (it produces half the world’s chromium, half of its diamonds, half its platinum, one third of its gold, and has one-tenth the world’s proven oil reserves and one-sixth of its forest cover) and population, is an unstoppable force. It is also an attractive place to invest."

Moreover, the Mail was of this opinion:ã€€ From farmers, commerce, government and society, Africa is being transformed. Some 330 million people are estimated to fall into the continent’s burgeoning middle classes. And "where there are middle classes, there is consumerism," it noted. It further pointed out, for instance, that Africans lead in subscriptions of mobile phones. From 55 million five years ago, rate of subscribers had risen to 350 million in 2008, according to a UN report. Nigerians lead in this category of consumers. For this is whereã€€figure of phone subscribers jumped from 400,000 to 70 million in less than a decade. The country alone had helped "mobile Television Networks become a global telecom player in the process." The question may be asked: What has Nigeria itself become in the process? ã€€

The market capacity on the continent is awesome, no doubt. In any case, everything about Africa is; from its vast arable land area, its people, natural resources, to its market. The question however remains: how much of these are the countries concerned prepared to utilize to the benefit of their population? One independent contributor in The Mail’s pre-meeting series, Prof. Paul Collier, a development expert from Oxford University, pointed out something that’s already known, but which must not be forgotten at this stage in Africa’s history. The continent’s natural resources were "plundered," in the past. But now, he stated, natural assets of Africa should, in the face of the current global condition be "harnessed - not plundered." This for the simple reason that Africa is "the last frontier for discovery." Then he added; "We are at the early stages of what will, over the next decade, be the scramble for Africa." That’s a reference to the motivation behind the attention Africa is given at the 2010 G-20 meeting.

There is the fact of a known past to rely on in the argument that Africa should beware of the newfound love being extended by industrialized countries. ã€€There is no doubt that every attention given to Africa by advanced nations is an effort targeted at exploiting its rich resources. Investment will come in with the kind of good publicity such as The Mail gave the continent in this instance. But then, multinationals are known to dodge taxes, a larger chunk of profits made here is repatriated to mother countries, natural resources are taken away at ridiculously cheap rates, even employment that foreign investment should generate has become a mirage as most companies importã€€labour that is available.

President Ellen Johnson-Sirleaf of Liberia was among other African leaders, including Nigeria’s President Goodluck Jonathan that attended the Canada meetings. Writing in The Mail, the first African elected female president argued that good governance is neededã€€in containing this "scramble" for Africa’s natural resources for the good of Africans. Her concern is based on the fact that "for more than a century, Africa’s fate was more often than not decided by people beyond its shores." Leaders and policy makers across the continent would have to pay attention to Sirleaf’s piece of wisdom on good governance if the continent must not suffer the fate that was its lot in the past. ã€€ã€€