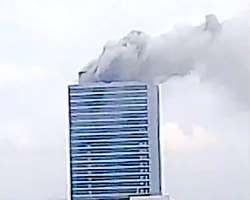 The uncompleted World Trade Centre, the tallest building in Abuja Central District, was on Monday gutted by fire. The cause of the fire was not immediately known but witnesses said it might have been from an electrical fault from the power source being used for the construction of the building.

President Goodluck Jonathan had in September 2011 launched the project at a cost of about $1 billion. The completion date was scheduled 2013. The 24-floor WTC Tower 1 which topped out in 2015 is said to be the tallest residential building in Nigeria, while WTC Tower 2 is the tallest building in Abuja, standing at 120m (394ft).

Fire-fighters battled for several hours to put out the flame.