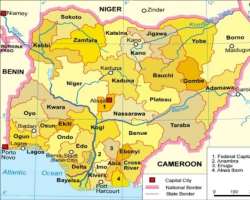 
There are, it appears, two separate, dramatically different Nigerias existing side by side. Even though both Nigerias exist within the same space, they rarely interact. In fact, going by the sharp differences between them, these two Nigerias might as well occupy different universes.

One is a Nigeria of legendary affluence and opulent excess. It’s a Nigeria where there’s a slush of cash and the only trouble is that the manufacturers of luxury goods – in Europe, North America and Asia – are often too slow to produce the next amazing toy or high-priced idea that the wealthy, and only the wealthy, should buy. This splurgy Nigeria is filled with private jets, swanky mansions, bulletproof Mercedes Benzes, swimming pools, and round-the-clock power generators. It is a Nigeria where homes are guarded by mobile policemen, or even soldiers.

It is inhabited, this Nigeria, by – among others – the givers and owners of oil blocks, by present and past presidents and their coterie, by bank owners who double as bank robbers, by legislators who moonlight as pugilists, by political godfathers, by governors and their commissioners, by contractors who transmute into money laundering fronts, by Christian and Islamic prelates fast to lie in God’s name, and by top civil servants who disdain both civility and service but worship greed and red tape. Inhabitants of this sector of Nigeria are hardly ever prosecuted for crimes committed, for they own the judges and the courts. Theirs is a Nigeria of little or no work but spectacular harvests.

Then there’s a larger, vaster Nigeria of deprivation, wretchedness and misery. This is a Nigeria of meager salaries, unpaid pensions, and petty allowances. It is a waterless, permanently powerless Nigeria. This Nigeria is a ghetto whose hordes are bereft of hope. It’s a Nigeria of overcrowded slums, of famished children wandering the streets, of open stagnant gutters that reek terribly. This other Nigeria is a cesspool of violence and degradation, a hell-on-earth where the only forms of recreation are sex, alcohol and drugs. It is inhabited, this Nigeria, by hoi polloi who must commute in danfo and molue buses. And their buses must clear out of the path the moment some privileged Nigerian shows up with a siren-blaring, whip-wielding convoy. These Nigerians are bashed and battered at will by the police, soldiers and any man in uniform. They are often treated as guilty even after their innocence is proven.

Nothing illustrates the separateness of these two Nigerians as dramatically as two recent scandals.

The first scandal is the decision by the Goodluck Jonathan administration to squander N10 billion in a party to trumpet Nigeria’s fifty years of failure. A friend called me a few days ago and asked a rhetorical question that captured the sheer farce of it all. "Does somebody who failed an examination throw a party to celebrate his abysmal performance?" he asked.

Apparently yes, if Mr. Jonathan and his team have anything to say about it.

Nigeria’s fiftieth anniversary is a study in – to paraphrase Chinua Achebe – snatching defeat from the jaws of victory. At independence in 1960, many (Nigerians as well as foreign observers) projected that Nigeria was on pace to emerge as an important medium-range power. That projection has been mocked by Nigeria’s record of missed opportunities, of promising roads not taken, of sound initiatives abandoned.

The country that Jonathan and his cohorts propose to serenade with a N10 billion party lags behind Ghana, Senegal and many other African nations in indices of social development.

Nigeria has excelled, instead, in several dubious departments. Its politicians have earned grand reputations for greed while failing to understand, much less respect or pursue, the most basic concepts in governance. With the exception of the 1993 elections, Nigeria has been unable to conduct elections that could pass muster. Reluctant to trust the verdict of the electorate, Nigerian politicians steal elections – and then declare (often with the nod of suborned pastors and imams) that God, bypassing voters, had given them power.

What exactly does the government want to celebrate? That religious and ethnic violence continues to plague – and sunder – the nation fifty years after independence and forty years after the end of the Biafran War? That the sickening conduct of politicians has fertilized the rise of a group like Boko Haram in Borno? That Nigeria’s police and soldiers get away with the indiscriminate slaughter of unarmed civilians in Maiduguri and the Niger Delta? That those who rig elections are less likely to be prosecuted than adorned with national honors? That, while Nigeria boasts some principled judges, too many members of the bench are known to sell their verdicts to the highest bidder?

What, pray, are we supposed to be giddy about? That Nigeria has no health care system worthy of the name? Or that we have two systems for the two Nigerias: the powerful and wealthy fly abroad for treatment while the poor troop to imams and pastors in search of elusive miracles? That our road networks are both inadequate and in dismal shape, stretches of our highways are merely conduits to early graves?

Students, labor unions, and a coalition of civic groups should insist that Jonathan call off this ill-advised, unjustified revelry. In a country where more than seventy percent of the populace lives on a pittance, why are we throwing a N10 billion jamboree? Is it to beat our chests and proclaim that we’ve invented a system for making large numbers of people suffer needlessly?

Which brings us to the other scandal playing out in Abuja. Members of the National Assembly have been making a very public demand for more pay. Indeed, these "honorable" men and women want a lot more pay for the NOTHING they do for the country.

Let me concede: to accuse these men and women of doing nothing is a tad too harsh and untrue. They do a lot of things, as a matter of fact. Last week, some of them in the House of Representatives, including a woman, tried out for Nigeria’s boxing contingent to the next Olympic Games. A few of them showcased an arsenal of feints, bobs, hook punches and upper cuts that should make Muhammed Ali (in his prime) jealous. Whenever TV cameras are fixed on them, some of these lawmakers speak in a manner that provides comic relief to a nation that sorely needs laughter. The senatorial arm of the legislature even gave the world a new mode of screening called "bow and go". Which other legislature in the world can top that?

In 2008, all of Nigeria’s schools were shut down for several weeks because teachers went on strike to press a demand for a minimum wage of N20,000. The National Assembly stood by, nonchalant, as the then Minister of Education pilloried the teachers.

By contrast, each of the 109 members of Nigeria’s Senate got paid a salary in excess of N2 million naira and allowances totaling N180 million last year. Each of the 360 members of the House took home a salary of N1.98 million and a grand N110 million in allowances over the same period.

For that compensation, the senators passed 13 bills. The members of the House rang in 16 bills to better the senators’ output.

It turns out that both senators and members of the House believe that they have been working on the cheap. Last Sunday, NEXT reported that each senator wants to rake in N400 million as annual allowances while House members are seeking N168 million each in annual allowances.

The outlandishness of these demands has led Nigerians to coin the rather fitting new name of legislooters for the lawmakers. The truth is that the current level of pay for this collection of incompetents is absurdly inflated. How absurd? Consider this one tidbit: President Barack Obama’s total package, in salary and allowances, is the equivalent of about N77.3 million.

At their rate of pay, Nigerian legislators (and Nigerian governors – who stash away several hundred million naira each month in the name of security vote) are in a position to hand pocket money to the US president. But here’s the rub: Obama earns each dime he’s paid. He works tirelessly to solve real problems and to keep America competitive in the world.

Nigeria’s grasping lawmakers cleave to greed precisely because many of them – I’d suggest, most – were never legitimately elected in the first place. In effect, they feel no compulsion to answer to the people they ostensibly represent.

The antidote to the culture of irresponsible, greed-fueled politics is for all sectors of Nigeria – among them, the electorate, judiciary, labor, and students – to insist on the entrenchment of credible elections. It’s the best formula, too, for hiring a crop of dedicated leaders, not self-serving ones, and ultimately merging the two Nigerias.