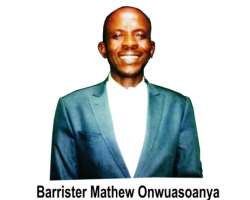 Barely 40 days after Anambra-born journalist and legal luminary, Barr. Matthew Onwuasoanya of the National Light Newspaper was declared missing; the noble and resourceful gentleman has been miraculously found and re-united with his family.

This was disclosed in a statement signed and released by Sir Chuka Nnabuife, the MD/CEO of Anambra Newspapers and Printing Corporation (ANPC) —the Anambra State's sole print medium where Onwuasoanya practices journalism.

"During the meeting, Barr. Onwuasoanya narrated his ordeal within the five weeks of his surprised abscence. He explained how he was taken from his residence on May 30, 2020.

"He confirmed that he was picked up by some security men as reported but he got released thereafter. After the shocking encounter with security agents which left him rattled, he promptly sought medical attention to attend to the traumatic experience.

"He disclosed that he received treatment all the while until he returned home while expressing his regret for his inability to reach out to anybody given that he lives alone and had lost his phones in the process.

"ANPC hereby specially express gratitude to Anambra State Government, led by Governor Willie Mmaduaburochukwu Obiano (Akpokuedike) for his very rare fatherly concern; Commissioner for Information and Public Enlightenment, C. Don Adinuba; the Commissioner of Police, Anambra State, CP John Abang; the Directorate of State Security (DSS), Ananmbra State Command; the NUJ executive and members in Ananmbra State; all operatives in the media industry within and outside Nigeria who contributed in no small way in tracing the whereabouts of Mr Onwuasoanya and identified with ANPC all through this period of dire need."

"We rejoice that we have found him.
An injury to one is an injury to all.
Long live Nigeria. Long live Anambra State. Long live ANPC. Solidarity forever," the statement concludes.

It would be recalled that Anambra State Newspaper and Printing Corporation, in June, announced disappearance of Onwuasoanya, who was whisked away from his residence at Nise, in Anambra State, around 2am on 30th May, by unknown gun-bearing men dressed in what looks like security men's uniform.

Speaking in an interview with National Light shortly after he re-united with his family, Barr. Onwuasoanya who could not hide his mixed feeling of surprise and gratefulness for the level of attention and priority given to his disappearance, heartily appreciated the collective efforts of every individual, agency and association that took part in searching and praying for him throughout the period, even as he apologized for any inconvenience the period might have caused them.