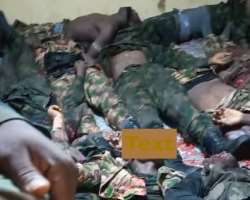 Twenty soldiers have lost their lives in an ambush by Boko Haram in troubled Borno State.

Multiple sources within the Civilian Joint Task Force (CJTF) and security cycle told our correspondent in Maiduguri that 23 soldiers were killed and two injured in the ambush.

The sources revealed that the deceased soldiers were attached to 25 Task Force Brigade, Damboa in Borno.

The sources said the soldiers ran into an ambush along the Maiduguri-Damboa road as they were returning from a five-day clearance operation on Tuesday.

One of the sources, said, “Not less than 20 corpses of soldiers were retrieved from the spot where they were ambushed.

“The soldiers had been on an operation for five days and they were just 25 kilometres to reach the brigade headquarters in Damboa when they ran into the ambush.”

The sources could not, however, mention the number of casualties from the side of the terrorists.

Meanwhile, contrary to the claim, troops of Operation Lafiya Dole said it had eliminated 17 Boko Haram/Islamic State West African Province criminals and their collaborator while on clearance operations on Damboa-Maiduguri road in Borno State.

According to a statement on Wednesday by the Coordinator, Defence Media Operations, Maj. Gen. John Enenche, the soldiers of 25 Task Force Brigade deployed in Damboa in conjunction with elements of Sector 2 Special Forces reportedly made contact with a Boko Haram ambush team along their axis of advance on Tuesday.

The statement indicated that the troops outflanked and engaged the criminals with overwhelming firepower, forcing them to withdraw in disarray.

“In the aftermath of the encounter, 17 Boko Haram/ISWAP criminals were neutralised as several others were believed to have narrowly escaped with varying degrees of gunshot wounds, while a cache of arms and ammunition were equally captured by the gallant troops.