Uganda's biggest problem now is the ignorance of its younger population! 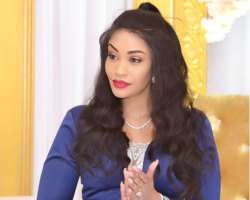 Zari Hassan is a Ugandan business woman based in South Africa.
Listen to article

This is the weirdest presidential election I have ever seen. It’s going to be less work for Museveni compared in the past. The opposition is all over the place. I have observed Peng Peng (based in Sweden) and Fred Lumbuye (based in Turkey) for some time. They make up stories, and love trading insults. Yesterday, they had a live video insulting Socialite Zari Hassan, Dr. Kiiza Besigye and several others. They said Besigye is sponsoring the extension of Museveni’s term, as he negotiates a transition govt, as if Besigye brought Corvid. They apparently have no other ideas than those above. Their attempt to sound rational, while selling Robert Kyagulanyi aka Bad Bobi, is just part of their usual shtick. I wonder how long it will be before they can find something else to say. They love making up “facts” about people. They then believe their own fantasies. They often accuse others of being moles in opposition, yet, I remember, one of them (Peng) admitting to work for Brian White ( NRM) at some point, and having been paid for it.

Anyway, like many Bobi’s bloggers, anyone who disagrees with them falls into one of their little mind’s compartments listed above. Maybe these labels help them deal with a world full of people that they hate. Well Peng does have some affection for his juices and smokes. He is not completely loveless. Peng Peng
Peng is like the spoiled child that never grew up. He thinks the only way to get attention is by acting out and in general being mean and shouting at everyone. Interestingly, a lot of Ugandans love and believe in his stuff……I am just guessing, but I think maybe he has never garnered any attention in his life except by this method. There are always those types around. In real life we just walk away from them and try never to see them again. Here on Facebook, and WhatsApp, he can be a constant nuisance and he knows it and is unavoidable. His repertoire has become boring and damaging to the youths following him. Maybe he will come up with another original insult to Zari and Besigye, or someone else. It is boring. Spending three days to just say Zari is that, Besigye is a mole, e.t.c. Like I said, they have their own facts in their heads. They create them to suit their mood and anger. Maybe one of his juices can calm him down.

The really sad part is that most of Bobi’s bloggers try to sow discord among people who, for whatever reason, were getting along. What is the point? To “win” something or other? If you review their exchanges in this thread, or anywhere else, they personalize their remarks.e.g. they attack old people (age discrimination), insult families, body parts, e.t.c. They rarely discuss issues or attract people to their movement.

Insults are a sign of the degeneration of our morals not really desperation for change. Most young Ugandans cheer up those who “kuwemula” or use foul language. Enemies are made, friends are made. The difference is how they are made. Zari started off by appealing to Ugandans to look into candidates ‘ credentials– she didn’t even mention a name, but PP have ended up making an enemy out of her. The derogatory element is in their hearts – almost said mind – which stipulates that everyone who disagrees with righteous Bobi Wine is evil, Muhozi or Museveni project, and thus only capable of “derogatory” terms.

It is sad that Uganda’s largest problem now is the ignorance of the young generation. I used to look at poverty as our number one issue because it is so bad; but listening to Peng and the way he attacked Sister Zari, I realise that we have got a bigger problem as a country. Why should you insult anyone for not supporting someone you support, or for having a different viewpoint? Everyone has a right to their opinions and beliefs, right or wrong. Revolutions involve self-control and convincing people to your side– Museveni was very good at it in the 1980s when Baganda were desperate for change.

The bottom line is that the People Power movement has been subjected to complete control by those who founded it and ran it, meaning anyone who might have a viewpoint differing from theirs is either a mole (as you keep referring to a lot of people) at the outset, or has to kowtow to the founder’s point(s) of view or be dismissed. So rather than being an all-inclusive group, its turning out to be a narrowly constructed social club, and if that’s the best they can muster, good for them, they deserve a home and it isn’t among normal (more or less) humans because clearly they are unable to interact rationally in a (more or less) normal environment. Bavuma buvumi bantu!