Ajimobi's Death, Its Aftermath And Lessons. 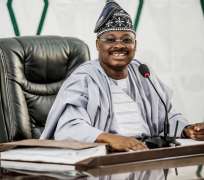 I have often stated that the death of a man does not have the potential of a duster to wipe off all his earthly inequities when he departs to the heavenly realm.

Even God is not given to pretenses about man's earthly conduct having a definite bearing on his due rewards or sanctions as He stated clearly in the holy books.

And when doctors insist on autopsies on dead patients, we do so for the onerous purpose of finding without equivocation, what caused the death of such persons and how such knowledge can be applied to benefit the living!

When I remember the mindless demolition of Yinka Ayefele's radio station and recording studios and the cruelty, crudity and wickedness it portends, l say loud and clear that... "May the soul and carcass of Abiola Ajimobi rot in hell!"

How could he have had the mind to visit such wickedness on a hardworking paraplegic who strove to achieve something worthwhile in life in spite of all inadequacies in Nigeria ensured by an irresponsible political class?! How could he?!

And his "wife" is now all over the place yapping about empathy and concern! Does she even know the meaning of that word?

By the way, she being Ajimobi's "former wife", implies that she is no longer the wife.

For the rudiments of the will?
The spoils?
Dr Tosin Akindele is a medical practitioner and public affairs analyst.