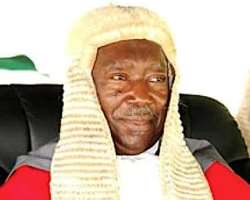 It is no longer a breaking news that Kogi State lost its two Heads of Courts within one week interval. The first was the death of My Lord, the Honourable Justice Ibrahim Shaibu Atadoga, while the second was the demise of My Lord, the Honourable Justice Nasiru Ajanah. Until their deaths, the former was the President, Kogi State Customary Court of Appeal while the latter was the Chief Judge of Kogi State.

In a Statement personally signed by the newly elected Chairman of the Nigeria Bar Association, Idah Branch, Musa Simon Esq., the Branch described the loss as a "monumental one which has brought severe shock and cold" to the Kogi State judiciary and the entire people of the State.

The Statement reads in full:
"The deaths of two Heads of Courts within an interval of one week in Kogi State is indeed, a monumental loss which has brought severe shock and cold to the Kogi State Judiciary and the entire people of the State. It is very unfortunate and extremely agonizing that we lost two of our very best judicial officers at a time when their services and wealth of experiences are most needed and treasured.

*The Honourable Justice Nasiru Ajanah was a rare Jurist in whom both the Bar and the Bench was well pleased and unified! He was a simple man, an upright Judge, and an intelligent jurist with amiable and admirable personality. His judgments and rulings are second to none in terms of their uniqueness and perfection. Having served as the Chief Judge of Kogi State in the administrations of three different Governors of the State from 2008 (when he was appointed in an acting capacity) to 2020, the late Honourable Justice Nasiru Ajanah is arguably one of the longest serving Chief Judges of a State in Nigeria until his demise. The tenacity and determination with which he led the Kogi State Judiciary cannot be forgotten in a hurry by both the Bar and the Bench. History and posterity will be very much kind to him even as we bid him farewell. May God accept his soul. Amen!

*The Late Honourable Justice Ibrahim Shaibu Atadoga on the other hand, was a rare judicial genius who was well admired by all. His easygoing nature, openess and generosity qualified him as one of the most "sought after and treasured Judges" in Kogi State especially by young lawyers. He mentored many Bar men and served his God fervently. He initiated and carried out laudable reforms in the Kogi State Customary Court of Appeal, one of which culminated into the amendment of the Kogi State Customary Court of Appeal Law in 2019, which expanded the jurisdiction of the Court. The Late Honourable Justice Ibrahim Shaibu Atadoga will be sorely missed for his incorruptibility by both the Bar, the Bench and the entire people of the State. May his gentle soul rest in perfect peace. Amen."