Evils Of Slavery... No Compromise Please. 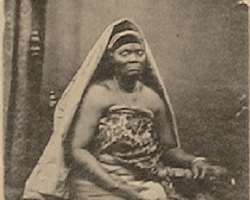 A DIRECT OPEN MESSAGE TO GBONKA EBIRI.
A certain Gbonka Ebiri... a blogger has just issued a post justifying slavery and attempting to absolve Efunroye Tinubu of the evils of slavery on the basis that slavery was a status symbol of the time. He so conveniently derived rationalization in the fact that no "nobility" was without slaves...the wealthy, the royalty,the influential, the powerful.

He argues that her pretence at philanthropy with proceeds of slavery should be enough grounds to absolve her of such label.

He proceeded to rant on some history... direct and indirect... to justify a gloss-over of her evils to fellow humans.

He says after all, we all have ancestors who were slave merchants and who gained their wealth, prominence and influence as facilitators of slavery and slave traders.

I have had cause to reply Gbonka Ebiri as follows :

"Gbonka Ebiri,
I do... Sarumi in Epe and Lenuwa in Ikorodu... and have since denounced them publicly, even on social media. I had gone further to ascribe all my misfortunes in life to retribution for my ancestors misdeeds... even before the wave of the statue - destruction occasioned by George Floyd's murder. I admonish you to do same. Your justification of the evils of slave trade across board is to say the least, unthought, wicked and disgraceful! "