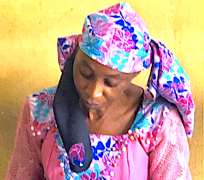 A Lagos based woman, Omotayo Yemisi Apelara has been convicted and sentenced to 30 years imprisonment for committing fraud.

Apelara was arraigned by the Lagos Zonal office of the the Economic and Financial Crimes Commission (EFCC), on November 25, 2013 on six-count charges bordering on obtaining money by false pretences and stealing to the tune of Thirty-two Million, Nine Hundred Thousand Naira (N32, 900. 000. 00).

One of the counts read: “That you, Omotayo Yemisi Apelara, sometime in 2008 at Alausa, Ikeja within the Ikeja Judicial Division, with intent to defraud, obtained the total sum of N18, 000, 000. 00 (Eighteen Million Naira) from Mr. & Mrs.Okpetu Onobume Jackson by falsely representing yourself as a Senior Land Officer appointed by Governor Fashola who would help them procure a piece of land located opposite Chevron Estate, Lekki Lagos , which representation you knew to be false and committed an offence contrary to Section 1(3) of the Advance Fee Fraud and Other Fraud Related Offences Act Cap A6, Vol 1, Laws of the Federation of Nigeria, 2004.”

The defendant pleaded not guilty to the charges , thereby setting the stage for her trial.

In the course of the trial, the prosecution counsel, M.K. Bashir, called four witnesses and tendered several documents that were admitted in evidence by the court.

Delivering her judgment, Justice Ipaye found the defendant guilty on all counts and sentenced her to seven years imprisonment each on counts one, two and three for obtaining by false pretence and three years each on counts four, five and six bordering on stealing.

She will, however, spend 10 years in prison as the sentences run concurrently.