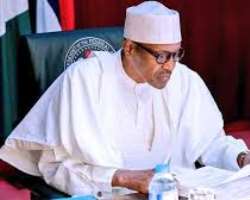 Some leaders of socio-cultural groups in the Southern region of Nigeria, on Monday, dragged President Muhammadu Buhari before the Abuja Division of the Federal High Court over alleged marginalization in appointments made by his administration since 2015.

The leaders sixteen of them in the suit filed on their behalf by 10 Senior Advocates of Nigeria (SANs) led by Chief Solomon Asemota and Chief Mike Ozekhome are asking the court to fine the president and three other defendants in the suit the sum of N50 billion for allegedly violating provisions of the 1999 Constitution and the Federal Character Principle.

Those sued alongside the president include the Attorney-General of the Federation (AGF), Clerk of National Assembly and the Federal Character Commission (FCC).

Mr Adakole Ijogi and Dr. Charles Nwakeaku.
According to them, the present composition of the government of the federation, and most of its agencies especially as regards the composition of the security and quasi-security architecture do not reflect the Federal Character of Nigeria but rather there is a predominance of persons from a few States and sectional groups dominating the opportunities and threatening national unity and integration.

Some of the issues brought before the court for determination include whether it was not “reckless and adverse to the interest of Nigeria”, for President Buhari to obtain a loan facility from the Islamic Development Bank, African Development Bank, the World Bank, China, Japan and Germany amounting to $22.7 billion (USD), for infrastructural development, only to allocate the bulk of the fund to the Northern region.

Some of the questions they want the court to answer are that, “Whether the power to appoint designated public officers including permanent secretaries, principal representatives of Nigeria abroad, which is vested in the 1st Defendant has been lawfully exercised by him since the inception of his administration from 2015 till date and Whether his actions are in breach of Sections 171(5), 814(3) (4) of the 1999 Constitution (as amended).

“Whether the power to appoint Nigeria’s Armed Services Chiefs, other Commanders or top officials of the respective Armed Forces Higher and High Commands’ General Staff ; namely the Chief of Defence Staff (CDS), Chief of Army Staff (COAS), Chief of Naval Staff (CNS) and Chief of Airforce Staff (CA8); the other statutorily established Nigerian National Security agencies or services , namely: The Inspector General of the Nigerian Police (1GP), the Directors General (DGs) of the State Security Service (SSS), National Intelligence Agency (NIA) and the Defence Intelligence Agency (DIA); the Heads of National Security Associated Federal Government (FG) establishments, namely the Nigerian Civil Defence and Security Corps (NCDSC), Economic and Financial Crimes Commission (EFCC), the Nigerian Customs and Excise Service, the Nigerian Immigration Services (NIS), the Nigerian Correctional Services (NCS), the National Emergency Management Authority (NEMA), the National Youth Service corps (NYSC), the National Security Adviser (NSA), the Ministers of Defence, Interior, Police and the respective National Security ministries’ Permanent Secretaries’ which is vested in the 1st Defendant, has been lawfully exercised by the 1st Defendant since the inception of his administration and whether these appointments are in compliance with 81(2), 814(3)(4), 8217(3) of the 1999 Constitution (as amended).

“Whether by virtue of Section 5 of the 1999 Constitution (as amended) which vests the Executive arm of government with a constitutional responsibility and obligation to execute and uphold the tenets of the 1999 Constitution (as amended), particularly the country’s national interest, sovereignty and security is not violated by the lopsided nature of the current appointments into Federal agencies are parastatals made by the 1st Defendant.

“Whether the 1st Defendant’s frequent arbitrary extension/elongation of appointment tenure beyond statutory prescription is not unconstitutional and inimical to the wellbeing, morale and harmony within the government workforce?

“Whether the 1st Defendant’s frequent appointment of retired persons instead of the most senior staff, is unconstitutional and tantamount to an abuse of office and threat to national unity?

Upon determination of the questions, the plaintiffs prayed the court to declare, “That the present composition of the government of the federation, and most of its agencies especially as regards the composition of its security and quasi-security architecture do not reflect the Federal Character of Nigeria but rather there is a predominance of persons from a few States and sectional groups dominating the opportunities and threatening national unity and integration.

“A declaration that the various appointments into positions in government, especially into strategic government agencies such as NNPC, NIA and other strategic infrastructural and regulatory institutions are ethnically discriminatory and lopsided and these violate the express provisions of the constitution as contained in Sections 14, 171 (1), 171 (5) of the 1999 Constitution (as amended)and therefore unconstitutional, illegal and ultra vires.*