WHY MEN STRAY...A man will look outside for what he lacks at home – Pastor Emmadagon 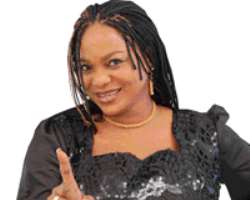 When the issue is how to successfully manage marital relationships, Pastor Eunice Iferi Emmadagon holds very frank, and some would say, unusual views. Once a month, women gather at the Sheraton Hotels and Towers, Lagos, for her programme, Stop Hurting, which is a specialized Bible-based fellowship session for people passing through emotional pain. Pastor Emmadagon is the Senior Pastor of Faith World Harvest Church, based in Port Harcourt, and has branches in Lagos and overseas. In this interview, she talks about why men stray, and how a woman can prevent it. Excerpts…

Let's look at it this way, if you are the type that has been looking for 'obe ata' in your house and your cooks don't know how to cook it, and you're entering into my house and you smell it, no matter how dirty my house is – and you don't like eating in dirty places, you will manage and eat it, these things happen to our men. For some men however, they'll be like 'I like what I smell but it won't be nice if I get home and I don't eat' and that happens especially with men who feel it's as good as what's in their house.

So oftentimes I ask the women, 'What did you do wrong, where did you go wrong?' Because your husband saw you and saw the other girls and chose to marry you. So there must be something about you that he prefers to the other girl(s). You were not the only girl at the time he chose to marry you, and in spite of all, it was like, this girl or nobody else. So at that point when it now became only you, and contrary to what people say, when men have you, they don't bother with you anymore. I don't believe in that because the kind of love I shared with my husband was even more than the first day we met. So I believe that love can be enhanced instead of deteriorating. So I ask women, at what point did you lose him?

Men have natural tendency towards polygamy

We are free agents, we have ability to desire new things, and like I always tell women, every man has many parts. A man has a place for his mother, his friends, his wife, his sisters, the children, and funny enough, girl friends. A man has a place for his girlfriends. You see, we are all Abraham's children, and if you look at his life, (if not for grace that we are operating in), it's like Jacob's, like Isaac's, it's a family thing. He was polygamous in nature, Jacob was, Isaac was, and we are from that lineage.

Too bad but there is a natural trait of polygamy in man, save for grace. Let us look at Abraham more closely – he was badly in need of a son, so that root of polygamy in him arose. Okay, Sarah misled him but for God's sake, there are certain things you can't mislead me to do because they are not in me. No matter how strongly you push me to do certain things, I won't do them. You know when people say, this person pushed me to do certain things, I just say that's you. It was there, it was just dormant, somebody just helped stir it up.

So that polygamous thing in Abraham was stirred up by his lack of a son. So when Sarah said, 'darling, why don't you...', I'm sure he said, 'No, I love you' but when she persisted, he thought, 'why not'. So in the same way, you have an ability to fill this gap. You know a woman is a dynamic person, I wish we can really maximize all our potentials. There is nothing you cannot do or achieve as a woman. If you can co-procreate with God, what else remains? If you can make life with God, why can't you repair life. You can repair anything you can make.

When a man lacks something in his house, he'll look for it outside…

So when a man lacks something, just like Abraham lacked something, if you let your husband lack specific things, feminine things in your house, every suggestion out there by a Sarah will kick off that polygamous thing in him. I don't care how righteous or how anointed he is because Abraham was no less anointed anyway. So every woman must know that anointed or not, her husband was first a man before he became 'man of God.'

Therefore there are some unguarded moments that the devil can take advantage of this to sow tares among the wheat. So as a woman, you must guard against that. Your husband's unguarded moments should be your guarded moments, because if Abraham had a son, if he had no lack, that polygamous thing in him would have been dormant forever because of the discipline and the love of God. It's the same way with our men. For example, your husband has a place for his mother. I'm not saying women should manipulate their husbands such that they won't go back to their mothers. But you see there are certain things he doesn't need to go back to his mother for because you're there.

Your husband can go back to his mother to give her love, to give her money, to give her care, to let her know, that he appreciates the times she was there for him picking up all his mess, and that he wants to make it up to her by taking good care of her.

But your husband should not be going back to his mother to ask, 'Why is my wife treating me like this?' Because no matter how much she loves you, her son comes first and she wouldn't want you to treat him anyhow. So you need to position yourself in a way that your husband can ask you himself, 'Why are you treating me like this?' The reason people go around asking questions is because they want an answer and they want attention. If he gets the attention and the answers from you, he does not need to ask his mother.
There are times it just comes to him to feel like a boy, because those silly things are playing in his mind, and he thinks, having a girlfriend won't be a bad idea really.

No matter how anointed he is, they play in his mind, thus you must be sensitive enough to notice it. In my own case, when I noticed such moments, I became a girlfriend to my husband. The Holy Spirit is in you as a woman to notice these moments. The reason why things go wrong in marriages is because the women get too busy to see their men as their first ministry. For me, my husband was my first ministry. So if you see it that way, and it's your focus, you'll become aware of these things. So when I see my husband is having such moments, I decide to become his girlfriend because I don't think he needs a wife at that point in time. So rather than look for a girlfriend outside, I become one for him.

When acting as his girlfriend, just become younger and naughtier

You know what girlfriends do, when you were your husband's girlfriend, what did you do (laughs)? The first thing I do is to become younger and naughtier, dressing like a girlfriend, doting on him like a girlfriend would. And of course I was first his girlfriend before I became his wife. I could still remember the things I did, so I would do those things. And when I notice that he needs a mother's care, I grow up, and behave like an old woman. And who is a mother? A mother is patient, can take all the mess and clean it up. She is a confidante. So he'll want to run to me to tell me things he shouldn't because he did it against me. The mother is ready to take it, she'll say, 'I'm pained but don't do it again.'

Sometimes you must have told your husband, 'I'm not your house girl o, I'm your wife', because at such times, you just realise that you are seeing a bully in your husband. I've had experience with men. I have five brothers, a wonderful father and a wonderful husband. But what beats my imagination is that they had something in common.

I just know that men are wonderful creatures if you treat them well, and they are not asking for too much. It's just that we the women are too busy, too aggressive and picking offences that we can't really watch out for these moments with our husbands. They are not asking for too much, they are just babies. I don't care how old a man is, he's a baby, if you apply the principles you'll apply with your child at home, you'll be able to catch him.

For instance when you see your husband feeling and behaving like a bully, then turn to his staff, 'okay sir, how do you want it sir?' You can afford to lose your rights at that point in time. What is love? You can lose your rights for love, it's going to be momentary. Because for him to have chosen you over the other girl(s), you should know how to get him easily. He loves you, that's why he married you, he doesn't want to see you as a slave.

So sometimes when it comes like that, I behave like a slave, because I know he loves me and doesn't want me as a slave. When I do that, he now begins to feel guilty. He'll start saying, 'That's not what I mean now, I don't mean to intimidate you.' but if you had reacted angrily, he would then say things like, 'I'll prove to you that this is my house', because the way he wanted to feel at that time is like a boss, and if you had ignited it, it would have worsened.

And these are things that break marriages, little things. And all these divorcees that you see, they are still in love with themselves. And that's why I always tell people I won't marry a divorcee because you've shown me, you're a good starter not a good finisher. Some people say it's not their fault but I won't marry a divorcee because I think they are still in love because the things that break their marriages are just patience and being observant, it's not because they don't love themselves.

Sometimes, the way a man will behave, if you are observant, you'll know he just wants to play with his small sister, he doesn't want a big girl around him, so turn into a small girl and play toys with him. That is why you'll see some men who after work are just satisfied to be within the four walls of their home. What do you want to offer them? They have everything they need at home.

No matter how Christian your husband is, he doesn't need a wife always