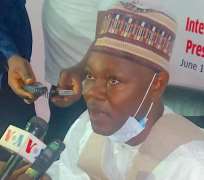 Borno State Commissioner for Local Government and Emirate Affairs, Alhaji Sugun Mai Meleh has said that Borno State Government has spent N131.94 million as payment of monthly allowances to a total of 12,735 vigilante Civilian Joint Task Force (CJTF and hunters across 25 LGAs of the state with the exception of MMC and Jere LGC s who have been engaged by the state government to complement the efforts of the military in the counter Insurgency fight and restoration of peace in the state.

He added that the state government has also procured 3000 metric tonnes of fertilizer and 34 tractors for onward distribution to the farmers across 25 LGCs where there is accessibility and security while the remaining 2 LGAs of Guzamala and Kukawa will also benefit whenever security is restored and civil authorities returned to the areas.

The commissioner who stated this Saturday at an inter ministerial press briefing said the ministry further furnished the palaces of the Shehu of Dikwa and Bama worth over N50 million which were destroyed by Boko Haram insurgents..

Meleh said that the ministry further constructed a befitting office complex for Local Government Pension Board.

The commissioner explained that as part of efforts adopted towards restoration of peace and resettlement of IDPs at their ancestral homes or localities a measures were initiated to mobilize vigilante CJTF and hunters to complement the services of the security agencies in building confidence among the populace..

“The state has also sought the engagement of mobile police force who will be deployed and stationed at Magumeri, Konduga, Damboa and Nganzai Local Government Areas (LGAs) as their operational centres. All this efforts are geared towards providing adequate security to local communities,” Meleh said.

He also noted that as part of measures initiated to boost farming at the rural areas and food production, the ministry had procured 3,000 metric tonnes of fertiliser and 134 tractors for farmers in the rural areas.

Meleh said that the ministry was also able to facilitate the implementation of immunisation activities in the LGAs in collaboration with the State Primary Healthcare Agency and Ministry of Health alongside the inauguration of CONVID-19 committees at the local government level to control and prevent further spread of the pandemic.

The commissiomer disclosed that the governor has approved the release of 80 per cent counterpart fund to the State Primary Education Board for the continual rehabilitation and reconstruction of basic infrastructures in LGCs primary schools.