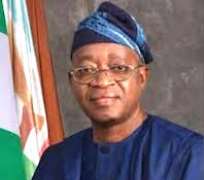 No fewer than four persons have died of COVID-19 in Osun State out of the 54 confirmed cases in the state.

The State's Commissioner for Health, Dr. Rafiu Isamotu confirmed this today while disclosing the discovery of four new cases in the state.

He said four patients of COVID-19 also recovered and were discharged of from the state's treatment and Isolation centre in Osogbo.

He said one of the latest cases is one the State's medical personnel.

Dr. Isamotu also revealed that one of the cases is an Osun-based India national who has been in the State since January this year.

He said the same person received visitors from Kano and Lagos States in recent times.

Dr. Isamotu added that the other new cases had contact with previous cases in the State.

He further revealed that "we had six active cases in the State. Of the six, we successfully treated and discharged four. But we recorded one new case on Thursday and by today, Friday, June 19, we recorded three new cases, bringing our total active cases to six", he said.