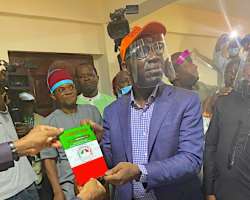 Edo State Governor, Godwin Obaseki, has formally defected to the Peoples Democratic Party (PDP) following his disqualification from the Edo governorship race by the All Progressives Congress (APC), THE WITNESS reports.

Obaseki arrived at the PDP secretariat in Benin-City at about 1:12pm to pick up his membership card. He was received by the state Chairman of the PDP, Hon Tony Aziegbemi.

The Edo state governor, resigned his membership from the All Progressives Congress (APC) on Tuesday, hours before the Court of Appeal affirmed the suspension of the party’s National Chairman, Mr. Adams Oshiomhole.

He is expected to contest the PDP governorship primaries billed for Tuesday. Gov. Obaseki remarked in his twitter handle: "I have officially joined the Peoples' Democratic Party (PDP), to advance my ambition to seek re-election as Governor of Edo State. I, as always, remain committed to engendering good governance and sustainable development of our dear state".