By Association of Advocates against Alcohol harm in Nigeria (ASAAHN) 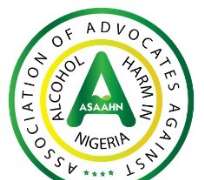 In Nigeria 52.6% of the population consume alcohol. The number of alcohol attributed deaths (ADD) for people above 15 years per 100,000 population shows that 42,120 Nigerians died from Liver cirrhosis, 15,365 died from road traffic accidents and a further 4,687 died from Cancers (WHO 2018). There is no alcohol policy in Nigeria regulating the production, advertisement and regulation of alcohol consumption in Nigeria especially regulation of locally brewed drinks.

In 2018, WHO launched SAFER, a technical package outlining five high-impact strategies that can help governments to reduce the harmful use of alcohol and related health, social and economic consequences. It is the WHO-led road map to support governments in taking practical steps to accelerate progress on health, beat NCDs through addressing the harmful use of Alcohol.

The Association of Advocates against Alcohol harm in Nigeria(ASAAHN) is a coalition of civil society organizations whose primary objective is to advocate for the adoption an effective alcohol policy in Nigeria. We have over the years engaged the Federal ministry of health and the WHO Nigeria Office on the need for an alcohol policy to be drafted according to the WHO best buys and SAFER initiative.

In 2019, the first National alcohol policy meeting was held in Abuja with stakeholders from Nigeria in attendance together with staffs from the Ministry of health, WHO and ASAAHN as the CSO representative.

The Association of advocates against Alcohol harm held her Virtual launch on the 18th June 2020 and had over 40 persons in attendance. The minister of health Dr Ehanire Osagie was represented by Dr Ezeigwe, national coordinator NCD who expressed the delight of the Minister on the idea of the the association and the launch. He highlighted the harm caused by Alcohol consumption and charged ASAAHN to continue its advocacy in ensuring that an alcohol policy is adopted in Nigeria. Other speakers at the event were Dr Mary Dewan, WHO NCD cluster lead who was represented by Dr Benjamin form the WHO mental health office. He praised the association , gave an insight on the consequences of harmful alcohol consumption and encouraged the association to continue its advocacy .

Mr Issah Ali, head of secretariat of the west Africa Alcohol policy also gave a brief overview of the alcohol situation ib west Africa noting that only 2 of the 15 west African states have a recent alcohol policy in place. He congratulated ASAAHN and the government of Nigeria on the work done so far and called for more action to get a comprehensive policy in Nigeria, pointing the impact that will have in the west African subregion. Lastly Dr Umenze Franklin, the Executive Director of ASAHHN gave a brief overview on ASAAHN explaining her objectives and what the future direction of the association.

ASAAHN was thereafter launched by the representative of the minister of health Dr Ezeigwe with a charge to continue he good work. A closing remark was done by Prof Obot Isidore who expressed his delight at the launch and encouraged ASAAHN to continue the advocacy and engagement. We finally had some remarks from Mrs Amadi, of the Federal Ministry of health who has been very instrumental in drafting an effective alcohol policy in Nigeria. We also had a remark from Dr Abanga from UNODC.

The association is presently overseen by the officials below: