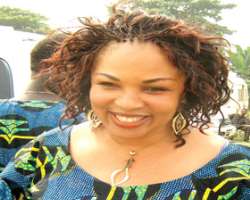 On Sunday, June 27, beautiful actress, Rose Odika, one of the prides of the Yoruba movie industry, will premiere her nesecond movie, she took time off her busy schedule to speak with BABATUNDE SULAIMAN on her career and crashed marriage, among other interesting issuesw movie, Enu Eje (Vengeance) at the Adebutu Kessington Hall, Ijebu Igbo, Ogun State. But even as she is neck deep in preparation for the unveiling of her

Sometime last year, you released your debut album, Ara Jesu (God's wonder). So, could you tell me what the experience has been like since you released it?

The album is doing very well in the market. It was my first album, so you should not expect that it would blow the mind of everybody. I am about to release another one. So, I would say the first one has come and gone; but, at least, it was welcome.

Would you say it is worth the while?

Well, one should not lose focus. It is worth it. It is worth staying on until one gets there. I don't believe in pursuing a thing and going back in the middle of it. I just believe that when people eventually see me as a good singer, then, I'll begin to enjoy the reward of all that I have been doing, musically.

So, it has not been totally rewarding?

Yes, at the moment, the reward has not been coming.

I wonder if you didn't go into music because some of your colleagues are into it.

No, it is a calling; it is a ministry I had to start. God called me into that ministry. It is a way of preaching to people and telling them the right and the wrong thing. So, I didn't go into because my colleagues are doing it.

I know you are preparing to premiere your new movie, Enu Eje (Vengeance). But is it a product of some personal experience?

I have a passion to fight for the right of women and Enu Eje is all about war against female abuse. It talks about why a man should love his wife and not turn her into a punching bag. It also talks about why men should care for women and not see them as just sex symbols. When you hurt a woman, she will never forgive you. Women don't forgive easily; they must always revenge. So, vengeance is the word, and I want all men to be careful and watch out for the movie.

To me, most of the themes in this movie, as you have just explained, have been celebrated by some other movie producers. So, what then is the unique thing about your movie?

My concept and the way I went about the story were unique. In the story, a lady from a wealthy home loves her husband so much; she cares for her husbands, financially and even ensures that he stays out of trouble. But, at the end of the day, the man accuses her of not being faithful to him. So, he seeks to disgrace her by getting married to another woman. You can't predict the end until you have seen it to the end.

How much did you spend on it?

Is this your first movie?

No, it is my second movie. I produced my first movie, Alaparutu, in 2009. I produce a movie once a year. It is because of finance and I don't have any sponsor.

I only know you as an actress and you don't feature in too many movies. So, how did you get that huge amount of money to produce the movie?

I am also into cosmetic business. I take care of people's skins. And because I don't feature in too many films, my pay is on the high side. I am very comfortable with what they pay me in the industry.

Why are you still based in Ibadan?

I have been asked the same question a number of times. I am used to Ibadan and nothing can take me out of Ibadan for now. Maybe when I remarry, then, I can leave Ibadan…

Do you have any plan at the moment to get married again?

Yes, verysoon, by the grace of God.

So, are you in a relationship?

For how long have you been in the relationship?

I met him at a party.

What struck you most about him?

It is his height; he is tall and humble. I want somebody who is taller than I am.

He is a businessman.

What have you learnt to do better now that you intend to go into another marriage?

Well, jealousy and so on.

So, I can say you have shared your personal experience in your first marriage with your fans in this new work?

No, Enu Eje has nothing to do with marital experience. My husband never beat me, but you will find all this in Enu Eje.